Puglia, in the southern region of Italy, is recognized for many unique and exciting sights. Centuries-old family farms, stunning coastline nestled along the sparkling blue Mediterranean sea and Baroque period architectural wonders are just a few of the reasons Puglia is considered one of Italy’s favorite destinations. But rest assured, this region holds even more surprises for all who visit this jewel in Italy’s crown.

The town of Alberobello, located less than an hour’s drive from Bari, Puglia’s capitol, offers a fascinating glimpse into the past. Stone structures, dating back to the mid-14th century, stand squat and proud in whitewashed glory. These stone cottages, or trulli, are utilized today as homes, lodging for tourists, shops filled with artisan and folkloric treasures, restaurants and even a church.

While the oldest existing records of the trulli are dated in the mid 1300’s, many believe these structures and the durable technique used in their construction, dates back to prehistoric times. There are many examples throughout the region of dry stone structures, meaning built without any mortar or cement to hold the bricks together, presumed to have been built in the centuries before Christ. It is a wonder that the trulli are still in such remarkably good condition.

The enduring trulli are constructed from local limestone. The watertight conical roofs are built up from slabs of limestone using the corbelled technique. This ancient building process is still used today and utilizes the weight of each slab to hold and balance the weight of the next. While the process sounds a bit like a “house of cards” but with limestone, rest assured it works. You just have to look to the trulli to know the strength of the corbelled roof withstands the test of time.

If Bari is the capital of Puglia, Alberobello is the trulli capital of the world. There are over 1,000 of these fascinating structures in Alberobello and in 1996 UNESCO designated it a world heritage site.

One of the most intriguing aspects of the trulli is the reason behind the proliferation of their construction. In the1300’s the land which is now Alberobello was given to the Prince of Taranto and later King of Naples, Robert d’Anjou. In an effort to avoid taxes the good people of the region constructed these mortarless shelters. Should a royal tax collector be on the way, the residents dismantled their homes quickly to avoid taxation. Amazingly, these structures, meant to facilitate a quick dismantling, are still standing today!

As the centuries marched on the population grew. By the end of the 18th century over 3,500  residents called the area home and the trulli increased in number. Families thrived in their somewhat primitive structures and the town of Alberobello grew around them.

Today the trulli are an active part of the vibrant and charming town. You can stroll the cobbled streets lined with these homes and shops. Once considered housing for peasants, grain and livestock, the trulli are now a source of pride for people in Alberobello. Window boxes spilling over with colorful flowers adorn the front of these simple homes. Shops, restaurants and bed and breakfast establishments thrive among the mushroom-like buildings. Quaint and lovely, you almost expect to see characters from your favorite fairy tale amble about amidst the tourists. The trulli of Alberobello are truly a must-see 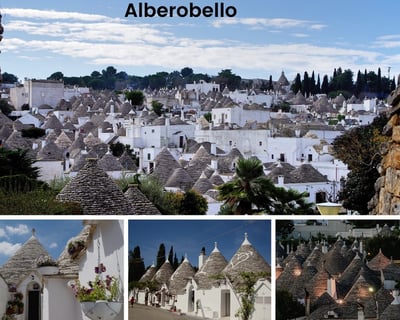 What Exactly is Truffle Hunting?