Athens, Greece; just the name conjures images of ancient treasures like the Parthenon, Greek and Roman ruins, sun-kissed olive groves and statues of the gods. When you find yourself in the actual birthplace of democracy and cradle of Western Civilization the experience is utterly surreal.

Beyond her historical relevance, the city of Athens also offers up a whole host of experiences for those who are fortunate enough to visit. Here we take a look at some of the must-have adventures for travelers to the city named for the favorite daughter of Zeus and goddess of wisdom.

Even those who don’t thrill at examples of ancient architecture will be duly impressed by this historic and storied site. The term itself, “acropolis” refers to a fortified hill. This high point upon which the iconic remains of ancient buildings stand, like the temple of Athena Nike, a shrine built to honor the two goddesses, the Theatre of Dionysus and several others, is a powerful must-see for anyone visiting Athens.

The most renown site contained within the Acropolis is the Parthenon.The Parthenon was another temple erected as an homage to Athena. As goddess of war, wisdom and protection the ancient inhabitants of Athens sought to please her, their patron. The Parthenon, like many of the important remains of the Acropolis, dates back to the 5th century B.C.

Yes, this is the culture that gave the world democracy, philosophy, the Olympic Games and so much more. But one of the greatest gifts the Greeks have given the world is an appreciation for delicious food. Greeks don’t simply enjoy food, they celebrate it. And the best place to engage in this tasty ritual is the Athens Central Food Market.

Visitors to this epicure’s delight will find a selection of tantalizing local foods to sample and an opportunity to learn and experience Greek food culture. Find authentic Greek specialties, meet local food growers and shop the way Athenians have for more than a century.

Athenians are friendly and there’s no end to the interesting shops and tasty noshes you’ll find around the city. The oldest neighborhood in Athens is The Plaka, which sits in the shadow of the Acropolis. Here you’ll come upon artisans at work, restaurants offering sustenance, famous greek coffee and even a famous distillery.

Check out the rugs nestled between 19th century buildings. Catch the fragrance of the lush flowering vines as they spill out onto the cobbled streets. And be sure to look for one-of-a-kind treasures to bring home with you as proof your visit to Athens was as real as can be. 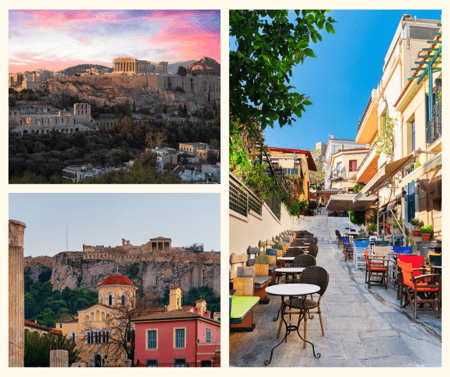