You are here: Home / Food N' Wine Vacations Blog / The Many Facets of port

The Many Facets of port

Port wine, that delectably sweet quaff often enjoyed after a meal, actually comes in a few different varieties besides the deep, dark and sweet Port we’re familiar with. Let’s take a look.

Port wine is a fortified wine that’s produced in the wine regions of the Douro Valley or northern Portugal. While typically thought of as a sweet red “dessert” wine, Port also comes in dry, semi-dry, white and rosé varieties.

The name “Port” came about in the 17th century and references the seaport city of Porto which is located where the Douro River meets the Atlantic. The eponymous potable was transported  along the river by boat and traded in Porto.

True Port is made from grape varieties grown in Portugal. Although other countries produce their own version of this fortified wine it can’t, according to the European Union Protected Designation of Origin guidelines, be referenced as Port unless it hails from the wine regions of Portugal.

Once the optimum levels of sugar and alcohol are reached the wine is fortified with brandy. This halts fermentation while preserving the natural flavor and sweetness of the grape. The wine is then aged for two or more years in a steel, concrete or oak vessel.

There are several styles of Port and they vary depending on the length of the aging process and the type of vessel used to age the wine. They are:

Ruby Port is the most produced and affordable of the varieties. It’s also the flavor palette that comes to mind when people think of port. Ruby Port is commonly aged in either steel or concrete in order to prevent oxidation. That’s how this version of Port is able to retain its classic deep red color. Ruby Port is cold filtered before it is bottled. Aging in the bottle doesn’t really change or improve flavor.

There is a version of Ruby Port called Reserve Ruby Port. It’s aged in oak for 4-6 years and must be approved by the Câmara de Provadores, a special panel appointed by the The Instituto dos Vinhos do Douro e do Porto or IVDP, a governing agency for wine production in Portugal.

This version of Port is produced from grapes if a single vintage year and sourced from various wine estates. Vintage Port is aged in barrels or stainless steel for as long as thirty months. It is then bottled and aged for 10-40 years as it grows in complexity.

White wine comes in various styles from dry to sweet. As the name implies this port is made from white wine grapes. The Colheita White is produced from a single harvest. It’s then aged in tanks until it achieves its straw-gold color. Reserve White Port is aged at least seven years and imparts nutty flavor.

Rosé Port first came on the scene in 2008 and is a relative newcomer among the Port varieties. This type of Port has a comparatively delicate flavor and is made in much the same way as rosé wine, with limited exposure to the grape skins to achieve a rose color.

LBV Port wine spends up to six years aging in barrels prior to bottling. This gives the LBV Port an opportunity to settle and mature making it a very drinkable wine that requires no decanting.

Also known as Vintage Character Port this version ins a blend of wines that have been barrel aging for a minimum of four years. They are unfiltered before bottling and cellared for at least three years before being made available. The longer the bottle rests the more it improves. After ten years a crust forms in the bottle, which is a good sign the wine is improving with age.

The rarest and most unusual Port available is the Garrafeira version. Currently it is only produced by one winemaking family in Portugal, the Niepoort family. The unusual flavor profile of the Garrafeira Port is described most often as tasting like bacon and having an oiliness that’s visible on the glass.

As you can see there is more to Port than what most people think. It’s a truly beautiful, enjoyable mosaic of flavors much like the country from which this luscious libation hails!

You'll have a chance to learn about port and taste during our trip to Portugal. 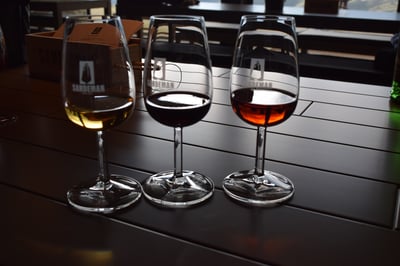