Northern Italy has so much to offer, especially Piedmont in the northwest. Bordering Switzerland and France, the Piedmont region is unlike any other region in Italy. The name “Piedmont” (Piemonte in Italian) means foot of the mountain and it truly is a land of glorious mountain scapes. Piedmont is surrounded on three sides by the Alps and boasts the highest peaks and largest glaciers in Italy.

As you might imagine, Piedmont is Italy’s epicenter of winter sports. The mountains are home to several ski resorts and all kinds of playgrounds for winter sports enthusiasts. The Alps create a stunning backdrop and rich green valleys amidst their sloping hills, wrapped in vineyards and orchards. Dotted among these hills and valleys you’ll find farm houses surrounded by tall poplar, terracotta tiled rooftops above charming villages and medieval fortressed fairytale-esque castles.

The capital of Piedmont is the city of Turin. Turin is a cultural center recognized for its refined architecture, work class museums and exquisite cuisine. Grand squares such as the Piazza Castello and Piazza San Carlo are lined with remarkable examples of baroque buildings and long-established fine cafes. Turin is also the center for Italian automobile manufacturing.

Piemonte is also the home to the fabled white truffle. The Slow Food movement began in Piemonte and we also have this region to thank for the ubiquitous and delicious hazelnut and chocolate spread Nutella. Piedmont grows the finest hazelnuts, rich in flavor and oil.

Some say it is the influence of the French and others, the Swiss, but the cheese of Piedmont are thoroughly luscious in their own right. Both cow and goat milk are used to create the cheeses of Piedmont and, in some instances, a combination of both is essential to the rich and highly palatable flavors. From Raschera to Gorgonzola and the most celebrated Grana Padano, as well as an array of delicious cheeses in between the cheeses of Piedmont will create a “taste memory” that will make your mouth water with longing whenever you recall it.

Wine, the Prize of Piedmont

The Piedmont region spills forth with all manner of treats for the senses, but, by far one of the greatest gifts to come from the Piedmont hills, in the shadow of the magnificent snow-capped Alps, is the wine. One of Italy’s most important wine growing areas, the Langhe and Monferrato regions were recognized as UNESCO World Heritage sites in 2014. This area has been cultivating grapes and producing wine since the Roman Empire.

Wine aficionados and novices alike can appreciate what Piedmont has to offer. Barberesco, Barolo, Dolcetto and Nebbiolo are some of the most celebrated sips in the world. These remarkable reds all hail from the vineyards of Piedmont.

Whites that Dazzle and Sparkle

Piedmont is not just known for the rich and ruby-colored quaffs, but some excellent whites are produced here as well. There are, of course, locally produced Chardonnay, and some lesser-recognized whites such as Loazzolo and Strevi along with some exceptional local Moscatos.

The favorite white among the local residents is the sparkling variety. While most people are familiar with the sweet Asti Spumante made from the Moscato grape, there are other excellent types of sparkling wines, both red and white,  The center of sparkling wine production is, of course, Asti, as well as Alba, although the grapes may come from around the region.

One of the more interesting towns to visit in the Asti province in Piedmont is Canelli. The town dates back to prehistoric times and figured prominently in Roman wine culture. Canelli is home to the first Italian classic method of creating sparkling wine.

The unique architecture and historical significance isn’t just an example of engineering excellence but also serves as a tangible jewel of wine culture. Each narrow passageway leads to a magnificent room used to store wine. The depth, at some points, is more than 100 feet below the surface. The temperature remains at a consistent 55° which is necessary to the aging and fermentation process of sparkling wine. These wine cathedrals are truly remarkable.

Drink it All In

The Italian region of Piedmont has so much to offer in terms of history, architecture, interesting museums, intriguing sites and fascinating lore, however the wine culture of this magnificent area is a truly remarkable legacy. The delicious and renowned red wines such as Barberesco, Barolo and Langhe Nebbiolo, the lively sparkling wines and white wines and, of course, the celebrated local wines you’ll “discover” in your travels through this prolific wine region will certainly impress.

Planning on traveling with friends? Ask us about the new wine hotel/villa surrounded by vineyards. (Limited to 8 people) 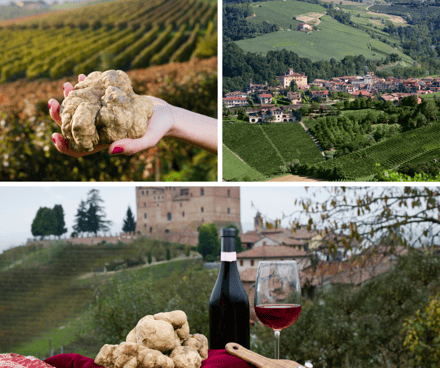