The Charms of Saint Emilion

The village of Saint Emilion, tucked into the heart of Bordeaux’s wine country, is small in size and population but full of history, architecture and charm. Although considered a small wine appellation with only 6% of the vineyards in Bordeaux in its confines, Saint Emilion has a longstanding reputation as one of the greatest wine regions in the world.

This lovely little hamlet has been preserved, withstanding the ravages of time, and provides the perfect view into long ago life in the region. History and pride abound in Saint Emilion, a UNESCO World Heritage Site.

You’ll also find Saint Emilion listed on Les Plus Beaux Villages de France (“the most beautiful villages of France”). This ranking is from an independent association created in 1982 to promote the appeal of the rich cultural heritage of certain rural villages throughout the country. This beautiful little village is a definite “must-see” for these rankings alone!

A Quiet Beginning and A Rich History

Though likely a populated area in prehistoric times, the recorded history of Saint Emilion goes back to the 2nd century when Romans ruled and sowed the area with vineyards. In the mid 8th century a monk named Emilion decided the small village was the ideal place for one to experience a simple and contemplative life.

Saint Emilion lived in a cave in the settlement, then called Ascumbas, and his followers flocked to the area. A rudimentary monastery took shape and the monks began to process the exquisite grapes into the finest wine.The rich soil of the region remains ideal for growing the grapes that give these wines their incomparable taste.

In the decades that followed many more religious would arrive in Saint Emilion to build their churches and monasteries, convents and other religious buildings. That’s why even today those who visit this charming village will note the abundance of religious sites. Saint Emilion is an important landmark and enjoyable stop for those pilgrims trekking the Camino de Santiago (Way of St. James) to Spain.

This Underground Church is A Must-See

The once primitive retreat, Emilion’s cave, served as inspiration for the most impressive monument in the region, the monolithic church. The underground shrine was constructed in the 12th century in the center of the town. The Monolithic Church is the largest underground church in Europe.

The portal to the church bars stunning sculptures depicting the Last Judgment and The Resurrection. The church is carved into a limestone cliff and has been shored up over the centuries to ensure preservation. The Saint Emilion Monolithic Church is astonishingly large with impressive columns, medieval architecture and beautiful works of art.

The church is fairly hidden beneath the rocky terrain but her bell tower stands tall. High above Saint Emilion the tower can be seen from virtually any spot in the village. Architecturally, the tower is a fascinating monument bringing together both gothic and Romanesque styles. For those who wish to see a breathtaking view of Saint Emilion and surrounding area you can climb the bell tower.

The Fascination of The Collegiate Church

The Collegiate Church of Saint Emilion is another religious building and historical monument. This beautiful structure is a very interesting mix of Romanesque and Gothic styles which reflect the lengthy construction period. The west door of the church is an obvious example of 12th century Romanesque architecture, while the north door very much reflects the Gothic period from the 14th century. You may use either door to enter the church or commence through the cloister, a very interesting site itself with period artifacts, statues and even graves built into the walls of the cloister.

Did Someone Say French Market?

Of course it wouldn’t be a French Village without the market. If you’re fortunate enough to visit on Sunday and Wednesday you can stroll the market in the town center from 8 am-1 pm. Typical of a French Village market you’ll find an assortment of eclectic items amidst local produce, fish, cheese and baked goods. The macaroons of Saint Emilion are particularly special. The village is said to be the birthplace of the iconic French treat, first baked by the Ursuline religious order of sisters in 1620.

You certainly can’t visit the town that produces the “finest wines” in one of the most renowned wine regions in the world without having a taste. Indulge your inner oenophile and experience a glass of the region’s best.

A visit to Saint Emilion is particularly special as this small and welcoming village allows you to immerse yourself in the true culture of the Bordeaux region. The wonderful people, historical sites, luscious wine, delicious treats will provide you with beautiful memories to last a lifetime. 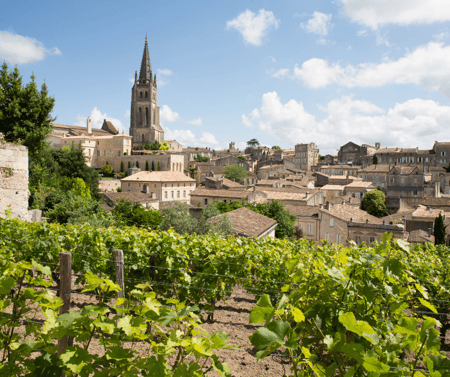