When you think of France and particularly French food, certainly cheese comes to mind. Mouthwatering, nose-tingling fromage is an important element of the French meal, with the cheese course arriving after the main course and before dessert.

Every region in France has its own special cheeses. There are too many to count but, suffice it to say, there are certainly many more French cheeses than brie, Camembert and roquefort.

In the time of General de Gaulle, the French-recognized cheeses numbered near 250. In the decades since then the number of cheeses the French consider their own has grown by leaps and bounds. Of course the French always need something delightful to pair with their exquisite wine.

What Makes French Cheeses So Luscious?

The influence of climate and terroir play a key role in the flavor of all of the exquisite cheese products of France. For instance you can’t replicate a soft, unpasteurized Banon cheese from the southern region of France in, say, a region like Normandy. The climate is different. The terroir is not the same. And the Normandy camembert is unlike any other camembert. The cheese, much like the wine and other agro products of France, is unique because of the region in which it is created.

How French Cheeses Are Categorized

French cheeses are divided into three main categories; pressed cheese, soft cheese and blue cheese. These cheeses are also made of different types of milks, such as cow’s milk, goat milk and sheep’s milk. The traditional cheese course in France highlights each of the three types of milk or the category of cheeses.

Next, you will need to break the cheeses down into quality categories. While this is somewhat a matter of individual taste it is assumed that the quality categories, from most coveted to “meh”, are as follows:

Fermier means farmhouse and refers to the cheese which is produced on the same farm from which the milk is produced.

Artisanal cheeses are locally made using milk from the artisan’s own farm or from farms nearby.

Industriel cheeses are factory made and often mass-produced.

When you create an elegant cheese presentation there are a few things to remember. First, try to stay away from those cheeses produced by industrial measures. You want the best flavors you can find, strong or mild, firm or soft, goat, cow or sheep, just make sure it’s as authentic as can be. A good rule of thumb? Look for the designation AOP or AOC on the packaging. These titles are awarded to cheeses that follow standards in production and quality.

When selecting the cheeses you wish to offer, pick a minimum of three and at least one from each variety. A good selection would be:

Remember to get a good mix of flavorful cheeses. Arrange your plate from the most mild to the strongest cheese and be sure your cheeses are served room temperature for the fullest flavor.

Celebrate the Cheeses of France

For the French cheese is more than food, cheese is culture, cheese is tradition, cheese is a symbol of la belle vie. The iconic French meal-from simple fare to multi-course banquets-always includes a cheese course.

As the world becomes more globalized it makes sense that a country so rich in tradition would strive to be recognized for their sublime cheese. To that end we must say a robust and resounding  “merci beaucoup” to this wonderful cheese-making country.

Whether it's trip to Bordeaux, Provence or Burgundy - You will get a taste of French cheeses. 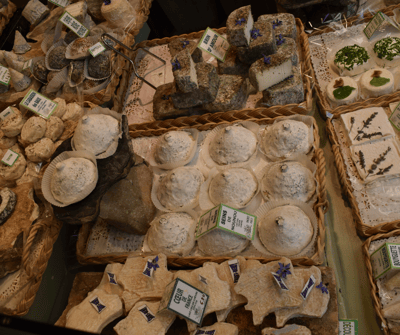