You are here: Home / Food N' Wine Vacations Blog / The Story of Pompeii

The Story of Pompeii

Nearly two thousand years ago, in the area now known as Naples, one of the richest, most populated and modernistic cities of the Roman Empire existed. What happened to raze this amazing metropolis is the stuff of both history and legend. While legends exist, here we offer the history in the story of Pompeii.

In The Shadow of Mount Vesuvius

Back in 79 AD over 20,000 people called Pompeii home. That may sound like small potatoes compared to large and popular cities around the world today but back in the first century it was quite impressive. In fact much of what we know today about the history and culture of the Roman Empire comes from all that scientists, archeologists and historians have studied about Pompeii throughout the last two millennia. The ancient city served as an integral part of life in Italy back then.

Pompeii sat in the shadows of a great mountain called Mount Vesuvius. The locals back then regarded Vesuvius as a “normal” mountain and were quite surprised when their neighbor began to throw out flames and create smoke. With no knowledge at the time of volcanoes, nor their deadly wrath, Pompeians simply went about their business, living life and unaware of the dangers that lurked just beyond the hillside.

August 24th, 79 AD the fire and smoke that previously garnered no more than a sideways glance from the townspeople turned into a fierce eruption. Ironically on the 23rd of August, just a day before Vesuvius' wrath, Pompeii held a festival to pay homage to the god of fire.

The volcano erupted with a vengeance, spilling lava, volcanic ash and fire and wiping out the entire city of Pompeii. Lava covered every square inch of the city and, in some spots, by as much as nine feet. A literal flood of lava, fire and ash.

The people of Pompeii had no idea what was happening. The smoke and ash were so thick the sun was no longer visible. Many Pompeians fled the city in fear, clutching their worldly goods and one another as they attempted to outrun the fury of Vesuvius. Some made it out while others took to the wrongly-assumed safety of their homes.

The remaining residents who did not succumb to the burning liquid rock were overcome by fire, toxic gas and walls of ash which spilled forth in the wake of the lava. Scientists deduced the there were four clouds of searing hot volcanic residue that surged toward the town at 180 miles per hour. Overnight the entire town and more than ten thousand residents were encased in a blanket of volcanic ash and hardened lava. Just 19 hours after the first eruption of Vesuvius Pompeii was no more.

Then in the late 16th century an unintended discovery by the architect Domenico Fontana identified the lost city beneath the ruins. Fontana happened upon an inscription which read ‘Rei Publicae Pompeianorum’ ( 'the state of the Pompeians’) as he was digging a water channel. What he discovered was an entire city entombed.

It took another few hundred years for archaeologists to begin excavating and putting together the puzzle which revealed the ancient city of Pompeii.

The Remains of Pompeii

Today you can visit these ruins in the Bay of Naples. Many fascinating discoveries have been made in excavations over the centuries. Even as late as 2018 archeologists discovered the intact remains of harnessed horses in the Villa of Mysteries, an intact villa just outside of Pompeii. The villa itself houses the best, most well-preserved examples of first century BC frescos and other artwork.

Other recent discoveries include a preserved tomb of the freed first century AD slave, Marcus Venerius Secundio in 2021, a thermopolium (an ancient version of a snack bar or inn) in 2020, complete with fresco paintings of the foods they offered, and a large, well-preserved ceremonial chariot in 2021. So well-preserved in fact that it is identified by its black and red panels, bronze construction and engraved metal medallions that adorn the rear of the carriage.

Some of the other fascinating discoveries uncovered in archeological expeditions include terra cotta pots containing remnants of food such as duck, goat, fish, pig and snails, found in the thermopolium. Also the complete skeleton of a small adult dog, which measured less than ten inches at shoulder height. This alerted scientists to the fact that Romans at the time could employ highly selective breeding of their companion dogs.

Although the discoveries, long preserved from the elements, were fairly intact at the time they were unearthed, they have been subject to erosion and damage over the last few centuries. Some of the objects were destroyed during the bombings of WWII. However, fine examples of architecture, art, horticulture and all that went into city development during the Roman Empire.

See Pompeii for Yourself

Pompeii is a popular tourist destination, as it has been for more than 200 years. It’s part of the larger Vesuvius National Park, declared a UNESCO World Heritage Site in 1997. In an effort to preserve what has been uncovered there is limited access to much of the ruins of Pompeii these days. But you can still visit and see for yourself some of the fascinating examples of life and death in the ancient city of Pompeii. And take heed, Mount Vesuvius is still considered an active volcano today. Although what erupts from the destructive mountain is no more than sulfuric steam these days so you are safe.

A visit to Pompeii is included in Dreamin' Amalfi Itinerary. 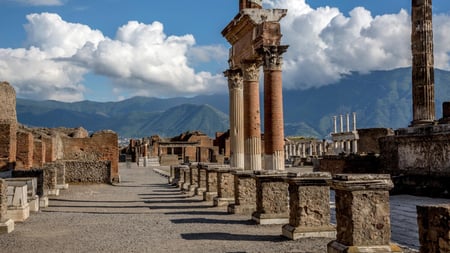