Americans love Tuscany for many reasons-the landscape and lifestyle chief among them. And we have that particular region of Italy to thank for such treasures as art and history (Tuscany is the birthplace of the Italian Renaissance), culture, and most importantly, wine and food! There is a true connection between Tuscany and America and, much like the early explorers, we shall discover some of those links.

There’s no question the immigrants to the new world contributed greatly to the development of these United States. Among the dramatic surge of immigrants to America in the late 19th and early 20th centuries were those from Tuscany who brought with them a way of life, wine and food that deepened an already strong connection.

Of course as things progressed travel to Italy-specifically Tuscany-seemed to crop up on everyone’s wish list. No matter which side of the water you call home, the relationship between Tuscany and America is a strong one. Let’s take a look at the Tuscan American Connection.

Long before our forefathers likely set foot on American soil, the Age of Discovery saw many famous and notable explorers “travel the ocean blue”. Of course Christopher Columbus and his crew are credited with the discovery of what is America however it’s well-known he, and his contemporaries, assumed the new land was part of Asia.

Enter Amerigo Vespucci. Vespucci’s family had a relationship with the Medici family, prominent in Italy during the Renaissance and rulers of that country for more than 300 years. Vespucci was educated by his uncle and worked for the Medici family as both a banker and then a supervisor of their shipping business which was located in Seville, Spain, where Vespucci relocated in 1492.

While in Spain, Vespucci was able to see firsthand the ships which would soon be exploring the world. International trade, insofar as that period's definition of international, was proving quite lucrative. Coffee from Ethiopia, silk from China and spices from other exotic lands were in high demand. Vespucci longed to be a part of it all.

What’s in A Name?

Vespucci also was intrigued by navigation and exploration. It didn’t take long before Vespucci himself, armed with his extensive knowledge of navigation and cartography, among other seafaring skills, hit the high seas himself.

As he traveled to the new land he noted it was quite separate from Asia and was in fact two separate continents. Because of his discovery the continents were noted as America (a feminine version of the explorer’s first name, Amerigo). That is why today we have the official continental monikers of “North America and South America”. Thanks to that knowledgeable map-reader from Tuscany.

So you see, from the very beginning the Tuscan-American connection was forged. Here are a few examples of the Tuscan influence.

Another renowned Tuscan was Giovanni da Verrazzano, the first explorer to enter what is now the Hudson River via the New York Harbor. The waters linking the New York Bay and the New York Harbor are called the Narrows. A famous and quite necessary bridge linking the Boroughs of Brooklyn and Staten Island is called the Verrazano-Narrows Bridge. The bridge, the longest suspension bridge in the world until 1981, was named for this remarkable explorer.

In 1754 a man named Filippo Mazzei met Benjamin Franklin in London where Mazzei had come to start an Italian import business. Among the products was wine. Filippo had a worthy connection to Tuscan wines as his ancestor, a winemaker and chancellor of the Florentine Republic in the late 14th and early 15th centuries, obtained the Chianti denomination.

Franklin, ever the innovator, and Mezzo discussed an idea to bring some of the agricultural products of Italy to the US to be cultivated. Franklin thought such items as olive trees and grapes for winemaking would be especially advantageous. Mazzei came to the US with seeds, plants, silkworms, a tailor, 10 farmers from the Tuscan region and plenty of enthusiasm.

When Mezzo met Thomas Jefferson they became great friends and Mazzei’s liberal ideas forged the inspiration for the US Declaration of Independence. Jefferson gifted Mazzei nearly 200 acres (80 hectares) on which to build a home and develop a vineyard, with more to follow. The property was directly adjacent to Monticello, Jefferson’s estate.

Jefferson procured more than 400 bottles of wine annually from Artimino, Chianti, Montepulciano, Carmignano and Ama each year from Tuscany, making him the first importer of Tuscan wine in the US.

Although the British uprooted and destroyed the vines that Jefferson and Mazzei had developed, the original vineyards were resurrected in 1981 and currently produce some of the finest wine in Virginia.

Along with introducing grapes for the purpose of making wine, Mazzei brought other innovative Italian agricultural elements to Virginia. In fact many of the fruits for which Jefferson’s Monticello orchards are known were first cultivated by Filippo Mazzei.

Jefferson’s diverse orchards were slow-going to get off the ground as the Virginia winter was a bit more harsh than Tuscany’s weather. But, undaunted, as the semi-tropical plants failed to flourish the first time Mazzei sent to Tuscany for more. The sour orange and olive trees that grow at Monticello are there thanks to Mazzei’s persistence.

History demonstrates how rich and enduring the Tuscan-American connection was and remains to be. From art and culture to the Age of Discovery and beyond Tuscany has influenced American life on so many levels. 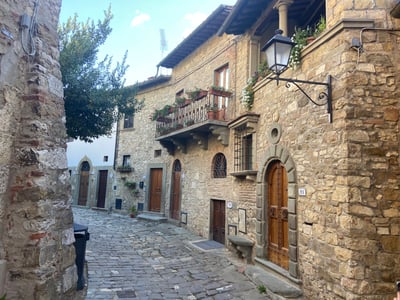 The Allure of Nice