A Guide to Croatian Wine

Surrounded by the azure Adriatic Sea, with sunny hillsides, plenty of fascinating history and breathtaking vistas, Croatia has always been a unique country. From the varied cultural influences to the diverse landscape and distinct microclimates it's no wonder this eastern European gem has fast become a hot travel destination.

As you might imagine, the beautiful Mediterranean weather that contributes to Croatia’s appeal has an effect on the agriculture, and specifically the viticulture, of this multifaceted jewel of a country.

The Art of Winemaking

Winemaking has long been an art in Croatia, dating back thousands of years. During Greek and Roman rule wine was a primary product and vineyards abounded throughout the country. However all of that slowed for decades of communist rule. The years of war that followed took a toll on the winemaking industry of Croatia.

Luckily for us the winemaking and grape growing craft saw a resurgence in the latter part of the 1990s. Young winemakers lovingly revived the ancient and indigenous varietals and, using modern methods, brought forth some amazing wines. Unique and appealing on many levels, much like the country itself.

As you travel around Croatia you’ll note the many vineyards. Some smaller regions and towns are dedicated to bringing back specific indigenous varietals and the wines they produce are quite remarkable. Light, crisp whites that dance on the palate and rich full-bodied reds that are reminiscent of Barolo.

The grape growers sometimes include other more recognizable varietals however most of the indigenous grapes grown in Croatia may be unrecognizable as they are typically not in use beyond a very specific area.

The Wine Regions and Their Wines

In Croatia there are three distinct wine regions, and several subregions, each with its own distinct landscape and terroir. They include the Eastern Continental, Western Continental and Coastal regions.

The northeast continental region includes Slavonia and the Croatian Danube. The area is relatively flat and bordered by the Danube, Drava and Sava rivers. The area experiences cold winters and hot summers. Vineyards unfold along low-lying hills and production in this region is concentrated on the white varieties. The main grape grown here is Grasevina also sometimes referred to as the Welschriesling though it isn’t related to the riesling variety. The white wines from the northeastern continental region are crisp, light, refreshing and mildly aromatic.

For those who appreciate a highly acidic and intensely aromatic white this region delivers. With the uplands and sloping hillsides the grapes get plenty of sun and wind during the growing season. The seasons tend to be fairly cool with cold winters. This region produces mainly white wines.

The coastal wine region of Croatia runs from Istria to Dalmatia and includes the southern islands. Wines in Istria are much like the ones in Italy. Although the Istrian region is recognized for its white wines. Malvazija Istarska is quite popular in this area. It’s a dry white with flavors of quince, honey, apricot, spices and fennel and is low in alcohol.

It’s interesting to note that reds are becoming more popular with winemakers and wine drinkers in the region. One very popular red is Teran. This red grape varietal is grown in the iron-rich soil of Istria and carries mineral notes. Teran is boldly flavored and has been described as carrying the flavors of forest berries, violets, smokey meat and game. Teran also has high tannins.

From the islands come some of the most popular and very interesting varieties. The isles themselves are microclimates with individual vineyards, which produces some truly fascinating wines. It’s said that wine is far cheaper and more plentiful than water on the islands.

Along the Dalmatian coast you’ll find the primary wine is Plavac Mali. Red, rich and full of flavor this delicious wine has notes of blackberry, peppers and fig, dark cherry, carob and spice. Plavac Mali is higher in both alcohol and tannins and the name means “little blue”. This grape is the very first in Croatia to have its own appellations, located on the Peljesac Peninsula jutting out of south-central Dalmatia.

Also in the Dalmatian region you ‘ll find a pretty interesting white. Posip is a white wine that is quite lovely. With notes of crisp apple, almond, citrus and vanilla its easy to enjoy.

From the island of Korcula there’s a very nice white, dry with a pear and pepper note the indigenous Grk is referred to as the most feminine of all grapes as it only produces female flowers. Growers plant Grk with other varieties to ensure pollination.

You may have heard of the so-called “orange wines of Croatia”. Though really amber in color, these wines are produced in every wine region. The wines are made from white grapes but instead of removing the skins they are left to stay in contact with the juice for anywhere from a few days to some cases, years.

Orange wines bear no flavor relation to the citrus fruit. The skins provide the color. It’s interesting to note the skins also create a robust quality to the wines.

Croatian rosé is seasonally popular, mostly available in the summer months. The rosés in Croatia are produced like the Provence rosés,  with flavor, tannin and color all coming from black grape skins. The Croatian version replicates the salmon-pink color of Provençal rosé and is an easygoing one to enjoy.

Sampling the wines of Croatia is a pure joy as there are so many different kinds and such unique flavors. When the wine craft reemerged with gusto in the 1990s the vintners vowed to stay true to the indigenous quality of the grapes and the wine they produce and also to place value on quality over quality. That means some wines aren’t always available. But take heart, you’ll always find a sensational sip in Croatia. 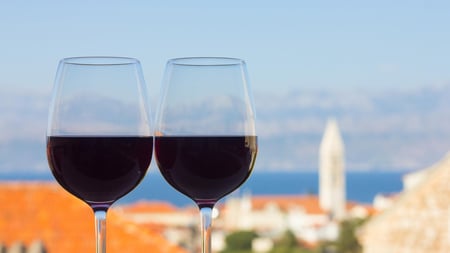 Let us know which Croatian wines you could find in your local wine store.

The Story and History of Tapas