You are here: Home / Food N' Wine Vacations Blog / The Story and History of Tapas

The Story and History of Tapas

In recent years Spanish tapas seem to appear on a diverse group of menus, From breweries to food trucks to upscale restaurants, Spain’s traditional small plate snacks are a fast favorite everyone enjoys.

In Spain “bar-hopping” is a common pastime. It’s a way to catch up with friends and relax after the day’s events or a nice way to spend a lengthy lunch in the company of loved ones. A part of the ritual is snacking on tapas. Spain invented the art of tapas and nowhere else will you find the incredibly creative small plates that you do in Spain.

What Are True Tapas?

But what exactly are tapas and how are they connected to the rich and colorful history of Spain?

The word “Tapa” comes from the Spanish infinitive Tapar, which means to cover, as in a top or a lid. As we mentioned the term tapas is used practically worldwide. That doesn’t always mean the small plate on which you’re noshing necessarily has anything to do with Spanish cuisine. It’s just a small bite of something to enjoy, typically alongside a glass of wine.

Tapas are not appetizers and shouldn’t be confused with such. True tapas, unlike appetizers, or, the Spanish aperitivo, do not indicate a supplement or prelude to a meal. While aperitivo are similar in that they are small amounts of food they are served just before the meal. Tapas are served in bars throughout Spain and are meant as a little something to enjoy along with a bit of libation and conversation. It is customary in Spain to enjoy a small snack when in the company of friends.

How Did Tapas Originate? The History of Small Plate Snacking

There are many legends surrounding the origin of this tasty little Spanish creation. One thing that is known for sure is the tapas way of enjoying a bite originated in Andalucia in the south of Spain. A popular idea relates to the name and is more practical than fanciful. The common belief is that long-ago Spanish bartenders and considerate hosts would place a slice off that delicious Andalusian ham or a piece of bread “to cover” their guest’s glass if wine lest the fruit flies get into their drink. That makes sense. Read on for some additional ideas about where tapas got their start.

The oldest and most popular legend of the tapas dates back to 13th century King Alfonso X of Léon, Galicia and Castille. The king was prescribed wine for an unspecified illness. In order to counter the effects of the alcohol and because he was unable to eat large quantities of food at one time King Alfonso partook of small plates of food with his “medicine”.

Another idea goes back to the fact that in or around the 18th century the majority of innkeepers’ patrons were illiterate. That meant they wouldn’t be able to read a menu. Instead the innkeeper took small amounts of the menu items and put them on the top of a pot lid for patrons to sample before they settled on a dish.

The Forward Thinking Bartender of Seville

Yet another theory involves a bartender in Seville who saw he could keep his customers happy and keep flies out of the sherry, beer or wine he served by placing a small plate atop the glass. He thought to entice more patrons he should probably put a little snack on the small dish. A small dish with a small snack to cover and accompany a drink? Sounds pretty plausible.

Tapas are popular all around Spain. The more traditional found on most of the tapas menus in Spain are:

No matter the origin of tapas or the countless creative ways they are served, they are a highly enjoyable way to spend time with friends and keep the festivities going. Tapas provide an incredibly satisfying taste of deliciousness that has revolutionized the art of bar snacks.

During the 'Splendors of Andalucia' tour we go on a fun evening Tapas tour. 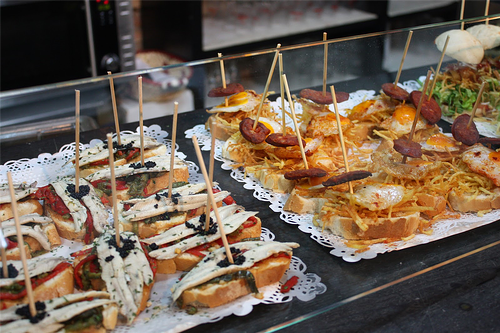 The 10 Best Places to Visit in Provence