Nestled deep in a valley of the Sierra Cantabrian mountain range, bathed by the warm Mediterranean breezes,  produces some of the richest red wines.

The region, bordered by Basque country, produces an array of fruits, vegetables, cheeses, and meat which mingle to create a mouth-watering buffet of flavors.

To know this region of Spain is to witness yesterday and today come together. Architecture and art, winemaking, artisanal cheese, and family farms ripe with traditional agriculture offer a landscape for the senses. You may expect to see a shepherd guiding his flock along the pastoral hillsides overlooking the rivers and streams that feed the valley of La Rioja.

Modern roadways replace cattle trails and shepherds paths, providing access to the unique and diverse towns of  La Rioja. Spend time with the locals and you’ll feel at home in this regional bridge between Basque and Castellan cultures. Enjoy the food, wine and fellowship of the Riojan people and you’ll soon be planning your return.

The walled city of LaGuardia hasn’t changed much since the 13th century. Situated high on a stone foundation, the city’s narrow passageways and intact maze of underground tunnels render it an auto-free zone. Wandering the bodegas (wineries) and cafes of LaGuardia proves a pleasant way to spend your day.

Logrono is the most populated town in La Rioja, which also famous for tapas or by the local name Pintox. Although the casual dining genre didn’t originate in Logrono, it’s said there are more tapas bars between the city’s two bridges than anywhere else in Spain. Logrono was a favorite destination for famed writer, Ernest Hemingway, whose lusty epicurean pursuits are legendary

Briones, a tiny, sleepy village, boasts some of the most passionate winemakers in La Rioja. The charm of this quaint foothills town is most noted in the picturesque and unspoiled views.

Employing long-held traditional methods of local viticulture has served Haro’s wineries well in the end result. The town is considered the regional wine capital and the much-anticipated Haro Wine Festival, held in June, is a premiere event for grower, vintner, and connoisseur alike.

Her fertile ground goes beyond the celebrated winemaking of La Rioja and is lush with pears, peaches, lettuces, asparagus, artichokes, and the popular piquillo pepper, present in the many regional dishes. Riojan barbecue is less genre and more culture. Believed to have evolved as a way to showcase the fruity palate of La Rioja red wines, one may challenge that theory, in turn, offering that the wine was made to enhance barbecue.

Immerse in Rioja, tasting wines at wineries of different styles with a tour that includes a selection of the most representative wineries in Rioja and a food experience. 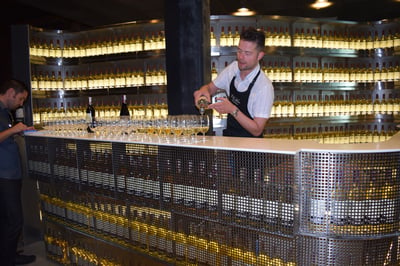