The Return of Sicily's Ancient Grain

Since the earliest days of civilization Sicily has been an agricultural boomtown. Especially when it comes to growing grains like durum wheat. During the 3rd millennium BC the good citizens of Stentinello, an ancient village near Syracuse, milled their wheat, presumably, as a sort of cereal or bread. This is evidenced by a millstone and pestle which were uncovered by an archaeological expedition of the area.

Sicily was extremely prolific at cultivating and harvesting durum wheat. The same extraordinary climate that produced some truly wonderful fruit and vegetables proved to nurture grains in much the same way. So much so that during the Roman Empire Sicily was referred to as “Rome’s Breadbasket”.

An Ancient and Flavorful Grain

There are as many as 50 ancient grains determined to have been in the region at one time, One of those ancient grains is Tumminia (or also called Timilia). Tumminia was grown in the inland area of Sicily and had a very short growing season (March-June). All good Sicilian homes used Tumminia to make wheat products such as bread and of course, pasta.

Tumminia was a staple in homes in the region until the mid-1900s when more forward-thinking (and investment conscious) farmers switched to durum products that promised a higher yield, and, therefore bigger profits. The richly aromatic, slightly sweet grain with hints of toasted almond, hazelnut and chamomile was merely a flavor forgotten by all but the grandparents who inhabit the island of Sicily.

The Return of Tumminia

Well, those grandparents and a few dedicated farmers around the town of Castelvetrano who supplied it to the bakers in the area for their famous Pane Nero, or black bread. The bread is a regional favorite and Tumminia is the necessary ingredient. This specialized grain imparts the slightly sweet, slightly nutty and toasty flavor associated with Tumminia and also gives the bread a deep rich color (more deep chestnut than black, however) that contributes to the name.

Beyond those few Tumminia growers in Castelvetrano the grain was pretty much non-existent. That is until a researcher stumbled upon some seeds while working at an ethnographic museum. When the discovery was brought to the attention of the Slow-food Movement it proved to be a return to the tasty reemergence of an ancient local grain.

What Makes Tumminia So Delicious?

A lot of the wheat grown in the region is durum. Durum wheat has a higher protein content than what you typically purchase at your local grocery store. Like semolina, traditionally used in pasta-making, didim wheat is more difficult to work with. But it makes for a very pleasant al dente pasta and a nice chewy and crusty bread. Tumminia is a durum wheat.

Heirloom wheats are beloved for their unique flavors. Most of the commercial wheat used to make even bakery and so-called artisan breads lacks the true flavor of the ancient grains. Today’s commercial grains are usually ultra-processed and lacking in the true integrity of heirloom grains.

Modern milling standards call for roller mills that separate the germ and the wheat from the wheat’s endosperm, or white part. This is done in an effort to prevent the fats in the wheat and germ from getting into the flour and shortening the shelf life drastically by turning the product rancid in short order. Consequently the super-processed flours last a long time. This causes the flour to be stripped of flavor, as you can imagine, but also vital nutrients are omitted as well.

The Authentic Reemergence of A Much-Loved Grain

When Sicilians want to bring back the inimitable flavors their ancestors feasted on they turn to the family run mills and the millers in the region who still do things the old-fashioned way by using millstones to grind the wheat. Not only does this method preserve the flavor but it squeezes out the oil naturally preventing the flour from turning rancid. The millstones grind the wheat slowly and at a lower temperature than the commercial roller mills. The result? A flour that is not only much more flavorful but is also highly nutritious.

Many people appreciate Tumminia for its beneficial nutritional properties. In fact you could say this grain is a superfood. It’s high in protein and fiber and a nutrient called lignin, a complex polymer known for its anti-tumor abilities. All that and flavor too? Tumminia IS a superfood!

There’s no debate that breads and pastas made from Tumminia are delicious but the wheat provides many nutritious benefits. Tumminia is grown in a completely biological way, meaning no chemicals or even manure was used in growing this amazing grain. And most farmers follow the strict agrarian technique, rotating the crops and picking them every two years so as not to disturb the balance of the soil. Obviously the ethical care with which the wheat is grown is something that is on par with the mission of the slow food movement.

Come to Sicily and taste this remarkable grain for yourself!

During our tour in Sicily we visit a mill that has been restored, where we also get to taste the local products. 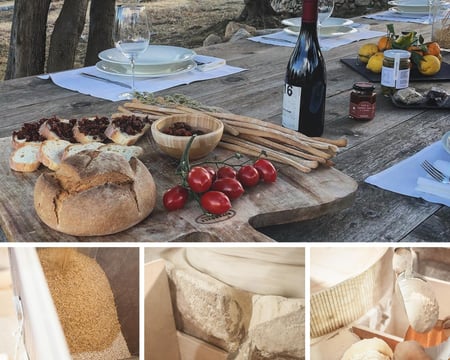