There’s no doubt the wine region of Bordeaux is a must-see for any traveler fortunate enough to have the opportunity. The lush vineyards produce some of the most famous wine in the world. Much like the celebrated regional reds, Bordeaux City is rich and deeply layered with surprising notes.

The city of Bordeaux is steeped in fascinating history spanning more than two thousand years.Traces of settlements in the area date back to the 6th century BC and much went into making this storied city the gem that it is today.

In real estate the slogan “location, location, location” is often bandied about. This is nothing new. In fact the city of Bordeaux first became popular in the age of Antiquity, when the strategic little crescent located in the curve of the Garonne River was sought out as the ideal trade route and crossroads between the Atlantic, the Mediterranean and the Iberian Peninsula.

Coveted for her location, Bordeaux City became the object of desire and came under the rule of Celts, Romans and England. In the millennia that followed her first known settlement Bordeaux City has a rich history, stunning architecture and dedication to preservation that caused UNESCO to deem nearly half of the town a World Heritage Site.

In 2007 the acclaimed organization inscribed Bordeaux City as “"an inhabited historic city, an outstanding urban and architectural ensemble, created in the age of the Enlightenment, whose values continued up to the first half of the 20th century, with more protected buildings than any other French city except Paris”. Bordeaux’s

Around 300 BC the Celtic tribe Bituriges Vivisci settled the city and it became known as Burdigala. Because of the much-coveted trade route, the Romans attempted to acquire Burdigala in 107 BC but failed. What is now Bordeaux did not fully fall under Roman rule until 56 AD when Julius Caesar’s successful conquest of the city turned Bordeaux into the Emporium of Rome.

Over the next few centuries Bordeaux expanded their trade base and began trading in wine. A construction boom took place, and the city grew adding massive buildings, amphitheaters, temples, spring houses, baths and luxurious houses in the region of Gaul. The city continued to grow and prosper thanks to the tin trade which brought a lot of traffic to the trade route.

During the third century there were numerous attempts by Germanic tribes to overthrow the Romans. Due to the ongoing wars, the city constructed 30 foot battlement fortifications. While these ramparts offered protection of the harbor they also limited port activity. The population began to dwindle.

In the 7th century Burdigala became a Christian stronghold. Churches and shrines were erected. Basilicas housing bishops and monasteries for the clergy popped up as well. Unfortunately so did those who wanted to control Bordeaux and during the 8th and 9th centuries Burdigala was the site of quite a bit of violence, culminating with the Vikings invasion in 848 AD. The population was slaughtered, buildings torched, and destruction all around.

The Arabic invasions and the vicious Viking attacks weren’t the only attempts to take over. Charlemagne tried to establish his kingdom in Bordeaux and eventually the city was the exclusive property of the Duchy of Aquitaine, which, at the time, was independent of France.

That all changed when the Duchess Eleanor of Aquitaine married the future Louis VII. When Eleanor became Queen of France, she brought her holdings with her, including Bordeaux. Unfortunately the marriage ended after 15 years and Eleanor went on to marry Henri Plantagenet who became King of England. That’s how Aquitaine, including Bordeaux, came under the English Crown.

The 12th century became known as the golden age of Bordeaux. Artisans flocked to the area, known for its bourgeois lifestyle. The town expanded, and wealth was accumulated by its inhabitants, mostly due to the wine trade.

For the next 300 years Bordeaux remained a part of English rule and it wasn’t until the end of the Hundred Years War in 1453 that France took over the region. Bordeaux grew in wealth over the next few hundred years and was improved and modernized to accommodate the growth of the population.

In the 18th century the Triumphal Arch of Aquitaine was built, as well as the Opera and Grand Theatre of Bordeaux. Public space expanded and alleyways were built. Townhouses and courtyards were created, adding to the ongoing bourgeois appearance of Bordeaux City. Much of these historical sites can be viewed today.

Modernization of Bordeaux continued throughout the Industrial Revolution and the population grew to 230,000 residents. During the First World War Paris came under threat and Bordeaux was briefly the capital of France.

During World War II the government again elected to seek refuge in Bordeaux but the city fell to the Germans occupation in 1941. The Germans, in an effort to control the harbor, constructed an underwater base to prevent the Allies from landing. In 1944 the city of Bordeaux was liberated and began to recover.

Repairs were made to significant structures, and redevelopment began. The mayor, Jacques Chaban-Delmas, was the main architect behind the construction of the University Hospital as well as two bridges.

Revitalization of A Beautiful City

Gentrification and revitalization of Bordeaux City, as it is today,  is owed, for the most part, to one man. In 1995 Alain Juppé was elected Mayor of Bordeaux and began restoration of the buildings along the Garonne River, which dated back to the 18th century. He also renovated the architecturally significant old town area and turned it into a pedestrians-only historical site with the addition of a tramway.

Under Juppé’s term as mayor the city grew in popularity. In addition to his restoration projects Juppé oversaw the building of a new two-hour high speed train link to Paris making Bordeaux City even more accessible. The former Maire de Bordeaux is celebrated for his contributions to renewing the spirit of Bordeaux and making the city among the most desirable places to live in France.

The lure of Bordeaux city isn’t only found in her history. The city offers entertainment, nightlife and amazing options for foodies. Beautiful surroundings, historical relevance, outstanding architecture and the opportunity to get lost in time as you meander this gracious and welcoming city-what more could you want?

Is visit to the Bordeaux region on your mind? 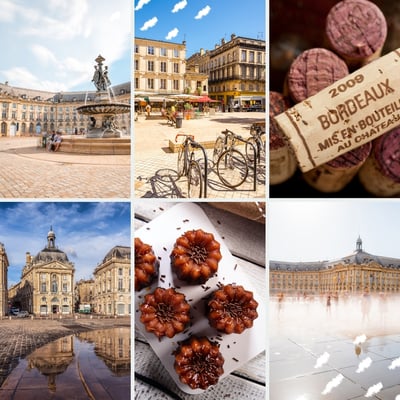