You are here: Home / Food N' Wine Vacations Blog / Is it Time For Limoncello?

Is it Time For Limoncello?

Leave it to the Italians to come up with a spectacular use for the abundance of tart, juicy Amalfi lemons that populate the southern region of the country. The special lemons of Amalfi are not like any regular lemon. These citrus beauties are double the size of the average lemon and chock full of delectable goodness. With their intoxicating aroma, juicy flesh and thick flavor-filled rind  Amalfi lemons are coveted for their unique, sweet flavor. It's no wonder this extraordinary fruit is the star of Limoncello.

Limoncello, a bright and oh-so-flavorful libation, is a national treasure which is exploding in popularity in other countries as well. In fact, in the United States this decidedly bright beverage is showing up on cocktail menus and in bottle shops all over the country.

The exact origin of Limoncello is up for debate. Sorrento, Amalfi and Capri all lay claim to this liquid sunshine. These three areas all boast similarly citing the passing of this simple, yet oh-so-satisfying, recipe through generations. While there’s no doubt a mere mortal of the sunniest regions came up with this simple recipe, surely divine inspiration was in the mix.

A Journey to Popularity

Although Limoncello has been enjoyed for a century or more it wasn’t until 1988 that the name was trademarked. A Caprese businessman named Massimo Canale registered Limoncello legitimizing his own tale of the luscious liquor’s origin. It goes as follows-

In 1900, at a small boarding house on the isle of Azzura, there was a prolific lemon grove tended by a woman named Maria Antonia Farace. Nonna Farace, in the thrifty way of grandmothers everywhere, sought a way to preserve some of the luscious lemons and their tantalizingly tart flavor and limoncello was born.

Shortly after WWII Nonna Farace’s grandson opened a restaurant and placed his grandmother’s special beverage on the menu. The drink became so popular that his son, Massimo, started making artisanal bottles to sell locally. The demand grew and here we are. Let us all raise a glass and say “Grazie, graze mille nonna!”

While the industrious Massimo was wise to trademark Limoncello, the recipe is so simple it surely was around long before 1900. It’s difficult to know the exact moment of inspiration but suffice it to say there are literally hundreds of anecdotes for you to enjoy, over a sunny sip or two of this celebrated drink.

Although there are many areas of Italy which produce their own version of Limoncello, main production of this perfect potable is in southern Italy. The Amalfi Coast is where most of the magic happens. Some northern regions produce a very similar quaff called Limoncino, especially around Cinque Terre.

A Simple Yet Seductive Sip

The basic recipe for Limoncello is lemon zest, steeped in a neutral (little to no flavor) spirit. After about three months the zest has infused the essential oil of the lemon into the alcohol and  a simple syrup (sugar and water) is added.

In Italy Limoncello is served as an aperitivo (prior to the meal) and a digestivo (after the meal, to aid in digestion). But we think you’ll agree that any time is a good time for Limoncello!

To enjoy this delightful indulgence the traditional way serve chilled, neat, in glasses that are also chilled. Absolutely the pause that refreshes!

To serve Limoncello as a sparkling cocktail try this recipe: 1 part Limoncello, chilled, with 5 parts Prosecco, also chilled. Quite enjoyable at brunch, lunch or anytime you need a little sparkle in your life.

When Life Gives You Lemons...

We’d all be better for taking a page out of Nonna Farace’s book. When life gives you lemons be grateful!  And celebrate life as Italians do-skip the lemonade and go straight to limoncello. 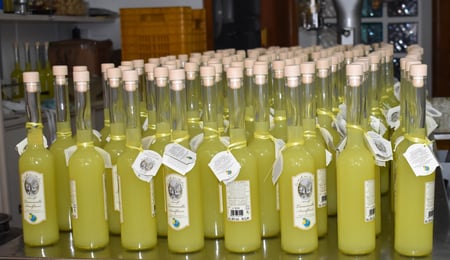