In the last few decades, the Italian region of Sicily has worked hard to preserve the natural habitat and control development of many areas of this unique island. The unique growing environment, rich soil and Mediterranean climate make much of Sicily a desired habitat for plants and animals, including the seeds of the umbrella pine commonly known as pine nuts and a key ingredient in pesto.

As part of the effort to preserve the natural integrity of Sicily a series of parks and preserves were created, including Madonie National Park. The park is in an area just southeast of Palermo and the Madonie locale is made up of mountainous terrain and a series of charming small towns and villages that will capture your heart.

One of these villages is Castelbuono. Castelbuono, 30 minutes from Cefalú, is home to under ten thousand residents yet is a treasure trove of culture and creativity. As a visitor, once you begin to unpack this treasure trove, you’ll be entertained and enlightened beyond your imagination.

This Manna is A Heavenly Gift

First we’ll look at nature’s wonder of Castelbuono, manna. Just like the biblical bread with which God showered the hungry Israelites, Castelbuono’s manna seems heaven-sent. Manna is a natural sugar formed by the sap of the Fraxinus Ornus, a particular Ash tree.

The vaguely sweet sap is extracted by making a slit on the tree’s stems and branches. The sap runs to the ground where the hot Sicilian sun and arid climate cause it to dry on the ground at the base of the tree. Manna is used as a natural sweetener, a laxative, a detoxifier, an additive to cosmetics and for medicinal purposes.

There is a movement afoot among a consortium of young producers of this unique and versatile substance to revive this cultural phenomenon. The Slow Food movement, so prevalent in and appreciative of small town Italian culture and local fare, plays a key role in supporting the production of manna.

Pastries That Are Out of This World-Really!

Some of the more renowned pastry shops in the area rely on manna for their specialties such as panettone and torroncini. One of the more famous pastry shops, in Castelbuono’s historic square, Fiasconaro, produces a pannetore so beloved they were asked to provide panettone for the International Space Station’s famous Italian Dinner in 2007. Truly the most famous and appreciated pastry in the galaxy!

Early Morning Trash Collectors Worth Setting Your Alarm For

In the early morning hours Castelbuono streets come alive with some of the most unique trash collectors you’ll ever find. They aren’t the typical hard-working people you’re probably used to, though. In fact, they aren’t people at all! They’re donkeys!

In 2007 the mayor of Castelbuono was faced with 2 distinct dilemmas: what to do about the expenses incurred in bringing the Sicilian Ragusa Donkey back from the brink of extinction and the challenges of collecting trash and waste from the very narrow streets of town. The trash collection trucks and street cleaners, besides finding it impossible to navigate the narrow streets, cost the small town 15,000.00 eu every 5-10 years.

This creative mayor came up with a plan. Use the donkeys to collect the village’s trash. It has worked out to be a win-win for the village and a special treat for those who live and visit this fun and oh-so-interesting town. These real life Eeyore's also promote community. They work with the disabled as a form of onotherapy, they are an extremely cost-effective way of providing a municipal service and they are fun! Tourists and residents of Castelbuono are truly captivated by the hardworking and adorable waste management team.

So Much More to See and Do in Castelbuono

There are many other attractions of note in this lovely little town. The Castle of Ventimiglia, the castle for which the town is named, was built in 1317 by Count Francesco I Ventimiglia, sire of one of the most influential families in all of Sicily. Today the castle serves as the civic museum of Castelbuono, offering a wealth of exhibits and cultural activities.

There is a chapel on the second floor of the castle which was built by two of the most famous sculptors to hail from Sicily, Giuseppe and Giacomo Serpotta. They are said to have taken stucco work from a craft to an art form, and that is apparent in the fascinating stucco sculptures of the Ventimiglia family displayed throughout the chapel.

In the center of town is an old mechanical clock tower atop the Palazzo della citta worthy of mention. You may also want to visit the Francesco Miná Palumbo Naturalistic Museum. As you might expect from a town amidst a National Park, there are collections aplenty. Archeological artifacts, ancient farming tools and many other treasures which tell the tale of Castelbuono and the surrounding Madonie area.

As if you haven’t already unpacked enough treasures to make a visit to Castelbuono worth your time, the surrounding hills provide epic views of both the town and the Madonie area. Just when you thought you’ve seen all there is to offer, surprise! This enchanting village has charmed you once more. 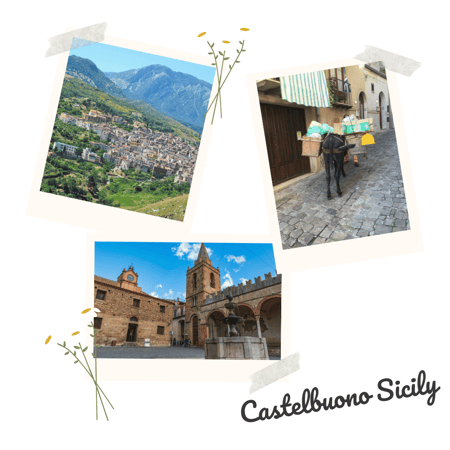 The Mediterranean Fjords of Provence