Sicily, A Crossroads of Culture

Sicily is the largest island in the Mediterranean Sea and is a province or region of Italy, but is autonomous and very much a separate destination all its own. Just off the toe of Italy’s boot is the island of Sicily. With its picturesque, often untouched, coastline, storied and diverse history and ancient roots the fascination of Sicily is unending.

The Fascinating and Diverse History of Sicily

Seemingly since the dawn of time Sicily has been fought over by every major Mediterranean player. Ancient Greeks, the Byzantines, Normans, Spanish and Arabs have all ruled this island at one time and the influences remain. In ruins and archeological sites, well-preserved architecture of the cathedrals and buildings, temples and theaters. The indigenous people of Sicily, the Sicilians, are thought to have occupied the island as far back as 8000 BC.

There are far more recent historical sites as well. Many of the towns on this richly historic destination date back to the Middle Ages. Castles, fortresses and cathedrals exhibit the architecture of the time.

The diverse landscape of the island of Sicily is remarkable. There are mountains that spill forth toward the sea,sparkling beaches with small islands just a short boat ride away. Sicily even has an active volcano, Mount Etna. You’ll find ancient ruins and baroque towns that bustle with activity. The local markets are a great way to jump into Sicilian life like a local.

As you might expect from an island surrounded by three uniquely beautiful seas (The Tyrrhenian, Ionian and Mediterranean) the views around Sicily are breathtaking. Stand atop windswept cliffs and gaze out at the azure blue sea. View miles of gorgeous coastline. Let your sights fall upon the ancient olive and almond groves or the vineyards that grow in the rich volcanic soil thanks to Mt. Etna. Stroll through a market and marvel at the array of fresh produce in a rainbow of gorgeous colors, breathe in the exotic and intoxicating aromas of the spices and listen to the chorus of excited shoppers as the vendors call out their special delights.

The rich soil and balmy climate on the island of Sicily produce an abundance of citrus fruit. In fact Sicily is often referred to as the Land of Oranges or Land of Lemons. Pistachios and almonds, olives and, surprisingly, prickly pear make up some of the culinary staples of Sicily.

Sicily offers plenty of opportunity to enjoy pasta and the island’s version of pizza and as you would imagine the seafood is quite fresh and delicious. In fact Sicily has long embraced the “farm-to-table” movement. Enjoy your meal in an intimate family-run cafe or choose your feast from one of the favorite stands offering “street eats' ' you will certainly be pleased with your choice.

Sicilians love their sweets, including the iconic Italian pastry, the cannoli. In fact one of the very first recipes for cannoli came from a convent in Palermo. The delectable treat you recognize today was born in the Middle Ages and has its roots in the Arab culture of the island.

We can thank Sicilian Arabs for introducing one of the savory favorites of Sicilian foods, Arancini. The traditional Sicilian take on the Arab version is essentially a ball formed from rice and stuffed with tomato sauce, peas, meat or ham and béchamel, then deep fried. You can usually find Arancini any time of the day or night in and around Palermo.

Wine has been produced in Sicily since 4000 BC and the wines of the island have been influenced by different cultures and viticulture techniques. The island’s dry, warm climate, abundant sunshine and moderate rainfall proves ideal for wine production. Marsala may be one of the most recognizable wines of Sicily but there are plenty of outstanding Sicilian reds and wonderful whites to sample, enjoy and perhaps take home.

The people of Sicily are laid back and very relaxed. You’ll find Sicilians to be a friendly lot, proud of their island and eager to help you fall in love with Sicily as well.

Is Sicily the land of your ancestors?

Love Italy and want to discover more? Check out The Best of Sicily itinerary. 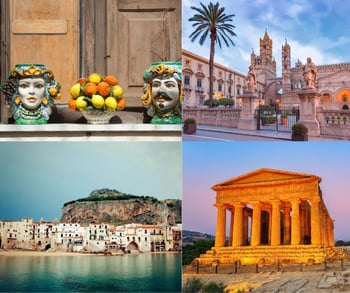 A Day in Rome