The Slow Food Movement-What Does It Really Mean?

Have you heard of the Slow Food Movement? What began as one man’s frustration as he saw fast food “culture” poised to edge out the native food culture and heritage of his homeland, has turned into a global movement. Here we explain the history and philosophy behind this magnificent movement that’s preserving the gastronomy and heritage of many cultures around the world.

History and Philosophy of The Slow Food Movement

In the 1980s Slow Food Movement founder Carlo Petrini became concerned when a certain fast food giant raised its golden arches near the iconic Spanish Steps in Rome, Italy. Petrini saw the burgers, fries and the rest as an insult and  threat to native culture and the very heritage that makes each region of Italy so deliciously unique.

Petrini and his fellow Slow Food activists started the movement in defense of regional cuisine, tradition, delicious fresh food and a slower pace in which to enjoy and taste these cultural dishes. A worthy endeavor in and of itself, but as the movement spread the philosophy of Slow Food evolved.

What Is the Movement All About?

In the last three decades the Slow Food Movement has worked to defend local farmers and food producers across the globe. Activists are always working to educate consumers on the values of a more responsible food system. Those values include:

The movement is all about preserving the biodiversity (ecosystems) of the overlapping links in the food chain. Food is viewed as more than just a commodity. Food is a celebration of cultural awareness, traditions that span millennia and history we need to protect.

When you think about the food of so many diverse cultures, the roots of those foods, it really is quite remarkable. With one bite of risotto in Milan you taste what generations of cooks worked to achieve. The local butter, the stock and hint of wine you won’t find anywhere else on earth. The flavor of tender, luscious melt-in-your-mouth Friuli Venezia Giulia prosciutto is unlike any other. Why? The microclimate that produces all that goes into this perfect sweet ham slice.

In any destination you visit the food is often a primary “must do”. To that end the Slow Food Movement has done well by the traveling foodie. It’s protecting and preserving not just the “farm-to-table” dining that, while quite delicious, is only a part of the movement’s philosophy. These Slow Foodies are using foods to tell the history of a region, a culture and a people.

Slow Food is seafood, responsibly caught mere steps from where it's prepared along the Spanish coast, olives from the grove you can see out your window, delicious wine grown and made by a local family, a fresh tomato salad enjoyed in a small Taverna on the island of Naxos. When you enjoy these examples of Slow Food you’re supporting the local economy, local families, farmers and fishermen, winemakers, olive growers and more. And you’re tasting their history. A win-win for all!

What’s This Snail About?

The movement chose to identify Slow Food around the world by the symbol of a snail. This stylish shelled gastropod works well. The snail is, in fact, itself slow food (get it?!) and a culinary specialty in the Italian city of Bra, home of the Slow Food Movement. When you dine in places that display the Snail of Approval you’ll have no doubt the establishment supports the Slow Food Movement.

Preservation, Protection and Delicious Food for Generations to Come

Although the Slow Food Movement may have started in northern Italy, representatives from 15 other countries joined Carlo Petrini and his group in Paris in 1989 to sign the original manifesto of the movement. Thus began the preservation of family farms, ancient ecosystems and generational ways of bringing culture to the table. The protection, really, of each and every global and unique way of life for future generations. 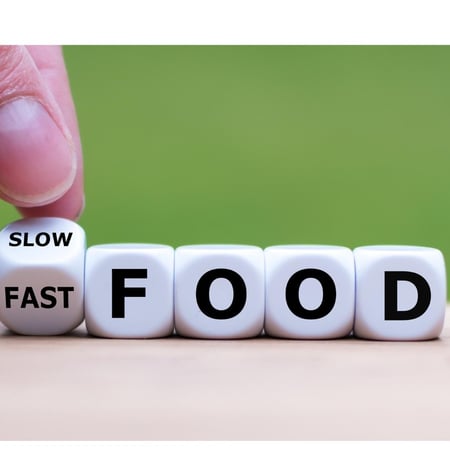 Foods to Try on The Amalfi Coast