Siena is one of the most beautiful medieval cities in all of Italy. There’s so much to see and do and eat in this Tuscan town it’s no wonder visitors flock to Siena on a regular basis. The town of Siena is home to the Piazza del Campo, said to be one of the greatest medieval squares in all of Europe, as well as the Palazzo Pubblico in all its gothic glory.

For all of Siena’s captivating sites there is none more fascinating than the Torre del Mangia. Construction on the tower began somewhere between 1325-1338 and was completed in 1348. A whopping 88 meters in height (288 feet) the Torre del Mangia rivals some of the early 25-plus story skyscrapers in the U.S. Quite an accomplishment in the 14th century when the tallest towers often belonged solely to the town’s duomo, or cathedral.

The Torre del Mangia was built intentionally to be the same height as the Duomo di Siena, Santa Maria Assunta, a symbol of equal power between church and state. The name Torre del Mangia translates to “Tower of the Eater.”  A rather curious name until you hear the simple story behind it.

The first guardian of the bell tower was named Giovanni di Balduccio and he was a man given to large appetites, specifically for food. Giovanni was said to spend everything he made on satisfying his endless need to nosh, thus earning him the nickname mangiaguadagni, or “eats his earnings.” His place of employment became known as the Tower of the Eater.

The Climb Worth Every Step

Those who share Signore Balduccio’s fondness for food may want to take advantage of the calorie burn offered by the 400 step climb to ascend the tower. Although an arduous undertaking and not recommended for those who are claustrophobic, the view from the top of the Torre del Mangia is nothing short of outstanding.

From the top of the tower, you’ll be treated to a breathtaking view not only of Siena but the surrounding countryside as well. The fit is somewhat tight so be prepared, but know, as with many things in life, the climb is worth the reward.

Keeping in mind that imitation is the sincerest form of flattery, the Torre del Mangia has inspired many similar towers in other parts of the world. In Madrid, the UK as well as in the United States there are replicas of this grand medieval tower. There is even a near-exact structure that was built in Provincetown, Massachusetts, in 1907 to commemorate the landing of the Mayflower Pilgrims in 1620. But there’s nothing like an original and seeing the Torre del Mangia in person is an experience you won’t soon forget. 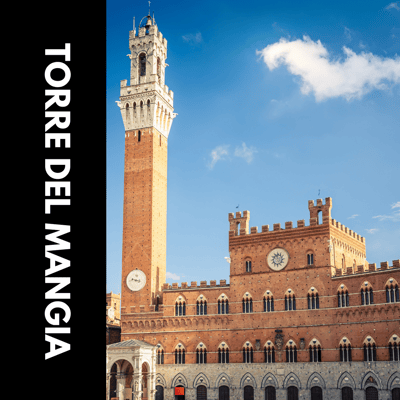 Italian Food You will Not Find in Italy