You are here: Home / Food N' Wine Vacations Blog / Turin is Like a Box of Chocolate

The famous line goes something like “Life is like a box of chocolates; You never know what you’re going to get.” And much like life and it’s iconic metaphor, Turin is filled with delicious surprises. Here we take the lid off the gilded box and present a luscious selection of all that makes Turin a destination of delights, including chocolate!

With a past that’s filled with fascinating history, royal grandeur palaces to rival any in Europe,  sprawling boulevards lined with wonderful examples of medieval architecture as well as modern-day shops the treats you’ll find here are seemingly endless. Turin is home to many historic cafes and for centuries a literary center. Is it any wonder creative legends like Puccini, Nietzsche, Dumas and Cavour found inspiration in this humble yet elegant city?

Turin, or Torino, is recognized the world over for famous Fiat automobiles, fine artisan chocolates, and religious significance of the Shroud of Turin. But there is much more to experience in this northern Italian city.

The city of Turin is home to the Royal Residences of the House of Savoy, declared a UNESCO World Heritage Site in 1997. In all there are 23 royal homes, spanning out from the historic city center of Turin. The Savoy dynasty first took hold in 1003 and, through a series of well-calculated marriages and affiliations, grew in prominence and power, ruling first the French-Italian border then the entire Italian peninsula.

As befitting such a grand and noble family they built their royal residences to express their affluence, entertain and hold courts with those who could aid in their quest to exact influence over the powerful of the day.

The buildings seen in Turin today were actually built in the 16th through 18th centuries. The heart of the city is where the sovereigns and princes of the House of Savoy resided and wielded their power over the territory. This is where you’ll find the more majestic palaces as well as the unassuming administrative facilities.

A stone’s throw from the city of Turin you’ll find the House of Savoy’s venues for grand celebrations as well as pastoral summer residences, more intimate in setting and surrounded by lush parkland. The dynasty of Savoy expressed their faith in gorgeous Baroque churches. Top on the must-see list? The Basilica di Superga is an architectural beauty of the Baroque-Classicism period and the final resting place of many in the Savoy lineage. The dome of this beautiful basilica is said to be a replica of Michelangelo’s dome in St. Peter’s Basilica.

Speaking of churches, the famous and revered Shroud of Turin, believed by many to be the burial shroud of Jesus of Nazareth, has been preserved in the royal chapel of the cathedral of San Giovanni Battista since 1578. It is a remarkable church dating back to the 15th century with the Chapel of the Holy Shroud (where the holy artifact is kept) added in the 17th century. Although the Shroud itself is not on display there are explanatory videos available for viewing.

The adjacent bell tower was built by famed Italian architect Filippo Juvarra. Climb the bell tower (only accessible through the cathedral) and get a Bird's Eye view of the area around Turin.

The cathedral and tower were constructed at the site of a 1st century Roman amphitheater and you can see the remains just a bit north of the church grounds. Also nearby are the red-brick remains of Porta Palatina, a Roman-era gate.

The premier shopping street, The Via Roma, was designed by Filippo Juvarra in 1714, along with the ever-so-graceful colonnaded arcades that rise over the stroll-able street. The arcaded Via Roma wends its way through three impressive piazzas, Carlo Felice a beautiful square to take in while enjoying a snack at one of the many cafes, San Carlo, a tribute to Turin’s patriotism and the large and impressive Piazza Castello, with its many sites.

The Piazza Castello is the central plaza in Turin and home to the sprawling Palazzo Reale. The Palazzo Reale is one of the more lavish residences of the House of Savoy. This mini-Versaille boasts glittering chandeliers, grand ballrooms, throne rooms and iconic Gobelins tapestries from France. Gilded furniture, medieval armor and arms as well as a very impressive collection of art are all on display in the Palazzo Reale.

The Palazzo Madama is also located in the Piazza Castello, This Baroque palace is also part medieval castle and home to the Museo Civico di Arte Antica. The museum claims treasures such as Antonello da Messina’s Portrait of A Man, as well as many more Renaissance era works including ceramics.

Southeast of Piazza Castello is another one of Italy’s large squares, Piazza Vittorio Veneto with the River Po just beyond. Just to the north of the Piazza Vittorio Veneto is one of the most iconic buildings in all of Turin, the Mole Antonelliana. Designed in the 1860s as a synagogue, while resembling a cathedral with a distinctive cupola and spire, it is now the National Film Museum of Italy. The museum, which bears the name of the architect who designed it, is a tourist attraction for the exhibits and tributes to cinema, however the building itself is an attraction in its own right.

The structure is a landmark on par with the Eiffel Tower, Big Ben and the Empire State Building. Local residents, students and visitors congregate there to enjoy the museum and its exciting glass lift (elevator). A ride from the basement to the pinnacle provides a panoramic view unlike any other.

The lift rises through the museum to the viewing platform some 550 feet above. Here you’re treated to a 360° view of the city and the surrounding  area, including the Alps which glisten in the distance.

South of the city of Turin is the Lingotto district, home to the original factory that produced Italy’s favorite automobile, Fiat. The building, built in 1923, is now home to a high-end shopping mall and art gallery. The rooftop track may look familiar. Michael Caine and some of the crew drove their minis around it in the movie The Italian Job.

Foodies everywhere are familiar with the grand emporium of Italian gourmet foods, Eataly. The purveyor of prosciutto and so much more opened their doors in 2007 inside an old Vermouth factory. At the heart of Eataly’s mission is a true appreciation of excellent Italian food. This is where people come to eat, learn and shop high-quality food in a relaxed and comfortable atmosphere.

Next to this must-visit for foodies is the Museo Nazionale dell’Automobile (MAUTO). Here you can see the spectacular automobiles that make Italy so very proud- Alfa Romeos, Ferraris and Maseratis.

And Now The Good Stuff…

Open this box of chocolates and you keep uncovering treat upon treat. And, so as not to disappoint, the final treat is chocolate itself!

Turin is known as the “chocolate heart of Europe” and has been since the 17th century. The history of chocolate is securely nestled in the history of Turin and Piedmont where the very first chocolatiers, chocolate houses and chocolate treats began.

Chocolate arrived in Turin around 1585 when the Duke of Savoy, Charles Emanuel I married Catherine the daughter of Philip II of Spain. Through the Spanish colonies chocolate arrived in Spain and then Italy. By 1678 Turin gained popularity for such mouthwatering treats as hot chocolate, chocolate spread and the like. By the end of the 17th century Turin chocolate was exported to Austria, Switzerland, Germany and France, who discovered what we all know today; once you taste the lusciousness derived from the cacao bean you simply can’t get enough.

Today Turin and Piedmont produce a whopping 85,000 tons of Italian chocolate each year. Artisan chocolatiers in and around Turin are known for creating their own personal specialties. There are so many from which to choose!

Bicerin, which means little glass in Italian, is a hot, layered drink which consists of espresso, chocolate and cream, so rich and so delicious.

Chocolate is celebrated in many different and delicious ways in Turin. From chocolate sculptures to gelato and even chocolate shot glasses you’ll find these chocolate delights throughout the city. Turin celebrates chocolate everyday but especially so in a 10 day festival of chocolate which occurs at the end of November.

As you can see this box of chocolates is quite inviting and especially satisfying. Turin is a destination rich in history, culture and especially chocolate. It is meant to be enjoyed.

Turin is part of the Discover piemonte itinerary. 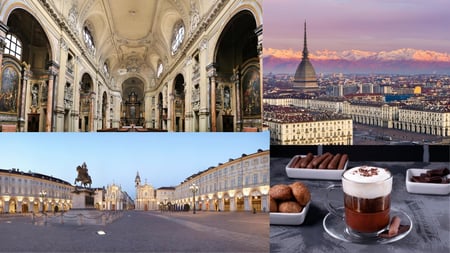