Not far from the historic center of Seville is a stunning stone building that resembles a royal palace. Now part of the University of Seville, this structure bears the look of power and aristocracy. The imposing building is surrounded on three sides by a moat and turrets where guards once stood watch. The facade is flanked by two examples of the social control of its heyday-a church and a prison. Behind the ornate facade are grand courtyards with lovely fountains and arched alcoves.

No, this impressive example of 18th century Spanish architecture is not connected to nobility, per se, but to a factory that produced tobacco products. One might say this illustrious building and the power it represents prove just how important tobacco production was to Spain’s economy well into the 19th century when tobacco was once king.

The Rise of Tobacco in Seville

In 1492, when Columbus happened upon the land which is now America, the contingent from Spain discovered the tobacco plant and the ways the indigenous people used it. As Spain controlled commerce with America they had a monopoly on tobacco and by the beginning of the 16th century tobacco manufacturers established themselves in Seville.

The central tobacco factory once stood in what is now the Plaza Cristo de Burgos but by the 18th century, as demand for tobacco products grew, it became apparent Seville needed a new location for production. The property just outside the city walls, and what was once a Roman burial ground, was chosen as the site of the new cigarette factory.

The factory first took shape in 1725 when plans were drawn up for the building. Construction commenced in 1758 and the factory was completed in 1770.

The initial product of the factory was snuff, made by grinding the dried tobacco leaves into a fine powder, and the initial workforce was all male. The factory changed course as cigars became more popular and by 1830 women took over production.

The all female workforce was preferred as the women made better quality products, would work for less money and were considered less “troublesome”. All the best attributes for a workforce that wouldn’t cut into the profits of the king. By the 1880s the factory hit the peak of production and employed more than 6,000 women to roll cigars.

Back in those days the all women workforce was a bit of a novelty and this inspired the French writer Prosper Mérimée to pen the novella Carmen in 1845. The French composer George Bizet took Mérimée’s story of the young Spanish temptress who is instrumental in the downfall of the naive soldier Don José and turned it into one of the most well-known and widely performed operas of all time.

The opera Carmen depicts a lawlessness and immorality that, at the time, was considered quite controversial by opera-goers. While a work of fiction, the lives of the “cigarette girls” who toiled away in the tobacco factory was by no means a fairytale. These women were underpaid and overworked. They often smuggled tobacco out of the factory to sell on the black market. Thus the moat, the prison and the military guards like Don José.

The fictional Carmen was united with the string of smugglers and used her feminine wiles to distract the unwitting Don José from his assigned duties (of which he was eventually relieved).

It’s possible to place yourself in the midst of the fabled cigarette factory, although it’s changed a bit. Carmen’s grandiose cigarette factory is now part of Seville’s university system. The building is open to the public and hosts audio-guided tours.

Nearby you’ll find the site where Carmen meets her bullfighter, Escamillo at Lillas Pastia’s Tavern, on Calle Maria de Padilla, the street that runs alongside the old tobacco factory. Not far away is the Plaza de Toros de Sevilla, the bullring in which the toreador Escamillo fights. This is also the site of (spoiler alert) Carmen’s deadly fate when she is stabbed by the obsessively smitten Don José.

Seville certainly inspired other famous operas, such as The Barber of Seville, Don Giovanni, Fidelio and The Wedding of Figaro. Certainly such a beautiful and exciting city will inspire you to create your own story-and maybe to sing about it!

The tobacco factory is part of a guided walking tour of Seville in our Splendors of Andalucia itinerary. 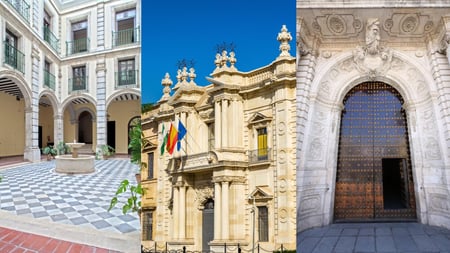