You are here: Home / Food N' Wine Vacations Blog / The best places to visit in Andalucia

The best places to visit in Andalucia


The autonomous community of Andalucia, in southern Spain is the cradle of iconic Spanish Culture. Stretching from the Mediterranean coast to the Sierra Morena mountain range, Andalusia, the birthplace of Flamenco, has also given the world Spanish guitar, the sport of bullfighting, and world-renown sherries. From the miles of hilly terrain, dotted with olive trees, comes the liquid gold we know as Spanish olive oil. With the Mediterranean Sea to the east, and the Atlantic ocean to the west, it’s no wonder the widely-known Spanish dish, Paella, saffron scented and bursting with goodness from sea and land, originated in Andalucia. 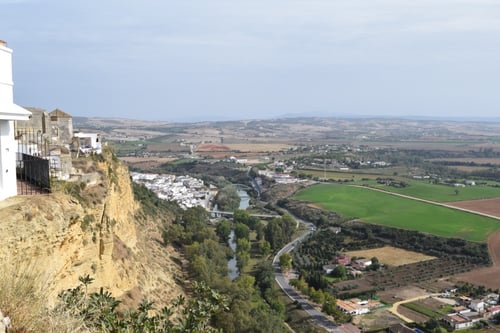 The rich history and culture of this region of southern Spain involves many religions and ethnicities. As the original melting pot of the world, Andalusia’s geographical gateway between the continents of Africa and Europe provided the earliest travel routes for ancient civilizations. Throughout the centuries Greeks, Romans, and Moors have all left their influence on the culture of Andalusia. Wherever their roots began, many people call the Andalucia home, living together and enjoying sun-drenched southern Spain and a love of life that comes naturally to this region. 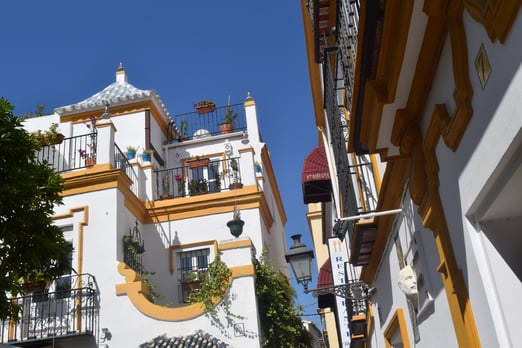 The exciting town of Seville, fabled to have been founded by the Greek god Hercules, has much to offer. An energy-infused vibe permeates this city and Seville’s active nightlife thrives.

The royal palace of Alcazar, built by the Moors more than 1000 years ago, and used today as a royal residence, is an architectural jewel. 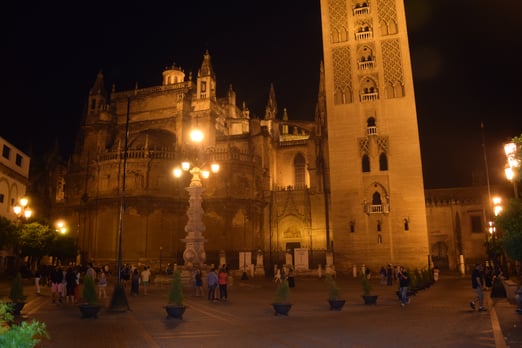 The Barrio Santa Cruz, once the Jewish quarter, is made up of labyrinthian streets and alley-ways. Whitewashed homes, whose balconies overflow with colorful flowers, and squares, nearly hidden from view by the delightfully scented flowering orange trees, make up the area. It’s easy to recognize how the allure of this area could inspire such legendary operas as Carmen, The Barber of Seville, The Wedding of Figaro, and Don Juan. 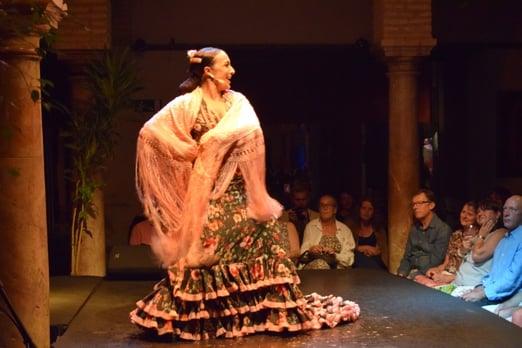 The Art of Flamenco

The art of Flamenco includes Spanish guitar-playing, singing, dance,, finger-snapping, clapping, and vocalization. Uniquely Andalusian, Flamenco was first recognized as an art form in the early 18th century. This fiery combination of guitar, voice and dance is popular all over the world, but best enjoyed in Andalucia, the birthplace of Flamenco. 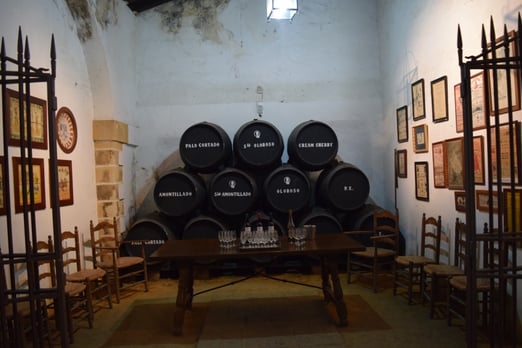 Jerez is a quaint, old town popular for it’s food market, narrow avenues, Royal Equestrian School, and sherry. The town of Jerez is home to some of the most magnificent horses and superbly talented riders in the world. Jerez is known for their superior breed of equine. The town is also well-known as a top producer of sherry. Bodegas throughout the area invite visitors to sample the finest sherries produced in Jerez. 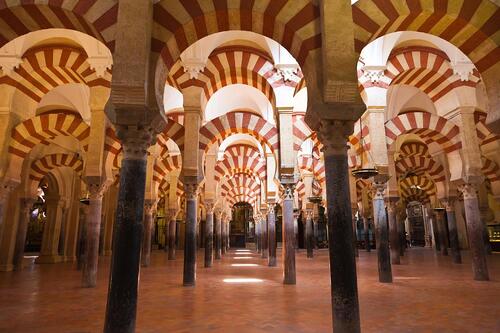 Andalucia produces more than half the world’s olive oil. The hillsides around the charming city of Cordoba are rich with olive trees, and the weather in this part of Andalucia is the ideal climate for growing olives. When thinking of olive oil, many people consider Italy the top producer of the finest olive oils. Italy actually purchases most of it’s olives from Spain, importing and converting to oil under Italian labels.

The by-ways of Cordoba are centuries old, but built in a unique way to keep the residents comfortable. The narrow streets and white-washed buildings create a cool respite from the often-intense sun. Balconies and windows overflowing with flowers, and patios are essentially outdoor living rooms where families enjoy time together.

Moorish influence is seen all over the region, however the great Mosque of Cordoba, or Mezquita, is truly spectacular. In the 8th century, the Mesquite was a shared place of worship. In the 1600’s a Roman Catholic Cathedral was built inside the Mezquita, where it remains today.

During a period that coincided with the Middle Ages in Europe, Cordoba played host to the Golden Age of Jewish Culture. For almost 500 years Jewish culture thrived educationally, economically and religiously in Andalusia, and it's impact is still felt today. 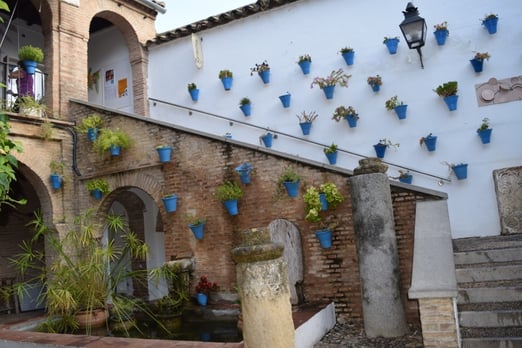 Strategically erected on hilltops throughout the area are the Pueblos Blancos, or “White-Washed Villages”. These small towns are seemingly untouched by the fast-pace of the region’s larger cities and offer an easy, relaxed immersion into Spanish culture. 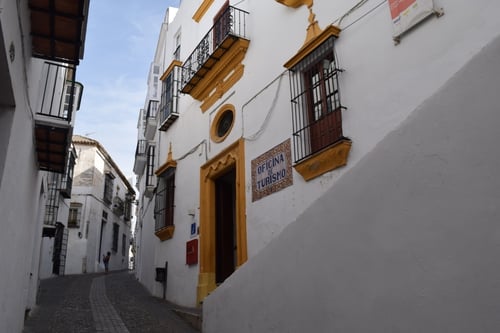 Breathtakingly unspoiled, La Sierra de Aracena is a natural park located northwest of Seville, is Andalucia’s treasure. Crystalline streams and lush woodland give way to stunning views. Walnuts and chestnuts flourish amidst groves of olives and orchards, prolific with fruit. Beyond the forests you’ll find rocky ridges bearing citrus and wildflowers. Hiking the Sierra de Aracena is a visit to Eden. 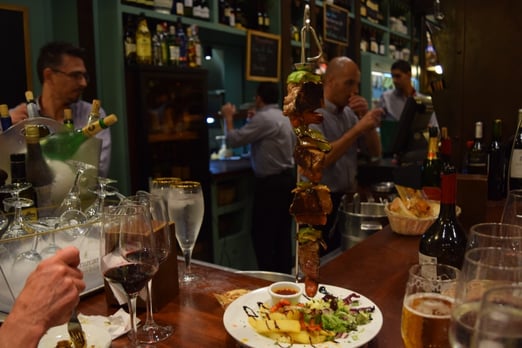 The popular ‘tapas’ featured in so many upscale eateries in the US and around the globe, originated in Andalucia. Small plates with local specialties allow you to taste at your leisure and experience some of the traditional Andalusian dishes.

Many foodies and gastronomes consider Jamon Iberico to be the finest ham in the world. The meat comes from prized black pigs, many of whom live freely to roam the hillsides of Andalucia, grazing on acorns in the fall. The climate cures the hams like no other on earth. The finished product is the pride and passion of Andalucia, and Spain.

In addition to the ham, tapas, and aforementioned paella, the region is known for a delicacy known as rabo de toro estofado, or bull’s tail stew. The unfortunate bull who falls to the matador provides the tail for the stew and it’s traditionally served at the next day’s bull fight. The region’s beautiful and bountiful produce contribute to the best (and authentic to Andalusia) gazpacho you’ll ever taste.

Do you want to learn about a unique Travel experience in Andalucia? Read about The Splendor of Andalucia

Top Four Reasons Why You Should Visit Portugal