Portuguese cod, or bacalhau, is a staple favored among Portuguese people at home and abroad. Similar to the Italian baccala or the French morue the cod fish is preserved in salt and soaked for a few days before being used in one of many Portuguese recipes. The fish is the same-cod- in France, Italy, Portugal and a few other Mediterranean countries and the preservation process is also the same-drying and salting. It’s what the Portuguese do with their bacalhau that makes it such a popular and cherished national food and necessary staple.

Although fresh cod is delicious when someone from Portugal, or of Portuguese descent, speaks of this versatile fish they are most likely talking about the dried and salt-preserved bacalhau. What’s interesting and somewhat crops to note is that the fish itself is not native to the coast of Portugal or anywhere nearby.

Atlantic cod is abundant in the colder climes such as Norway. Cod is a popular catch of fisherman in the UK. It is also found off the coast of North America in the New England regions, Canada and upwards to Greenland.

So how did this north Atlantic fish become so ingrained in the culinary history of Portugal?

The History of Cod in Portugal

The story begins in the 14th century when a treaty and trade agreement with England forged a cod-for-salt (which was abundant in Portugal but not in England) exchange. The salt also served as a way to preserve the fish for return to Portugal.

During the Age of Discovery in the mid-1500s a Portuguese expedition happened upon Newfoundland and began the business of Portuguese cod fishing. Eventually the Portuguese fishing fleet was driven out by the English and French contingents who dominated the region at the time. However during the brief reign of Portuguese cod fishing the fisherman (bearing salt for trade) dried and salted the fish to preserve it for their own sustenance and for safe keeping.

When the fishermen arrived back on land the salt was rinsed off and the fish dried until dehydrated. This was a task performed by women waiting shoreside on the South Bank of the Tagus, Setúbal, Aveiro and other coastal towns.

Once the British took over cod fishing it was up to them to supply Portugal with fish. Over the next centuries salted cod, bacalhau, was exclusively enjoyed by royalty and aristocrats. That changed in the early 20th century when meat became very expensive and fresh fish was impossible for those in the countryside of Portugal to access. Bacalhau to the rescue!

The dependency on those other countries didn’t sit well with the Estado Novo Corporatist government that ruled Portugal at the time. Those in power determined to free the country from its dependence on foreign fish suppliers and organized a Portuguese fishing cooperative.

The trek from Portugal to Newfoundland’s waters was difficult and dangerous. But, by 1957 Portugal became the largest salted codfish producer in the world. At home bacalhau became as important to the Portuguese diet as it was to the economy.

The Favorite of Portugal

Today, though still a popular favorite among the Portuguese, cod is now imported. Most of the codfish in Portugal comes from Norway (70%). Portuguese consume 20% of the global catch. Which breaks down to a staggering 77 lbs of codfish per person!

So how do the Portuguese consume their bacalhau? Some of the most popular Portuguese bacalhau recipes are fishcakes, bacalhau mixed with onions, potatoes, olives and eggs, bacalhau com nata which is salted cod and cream and roasted bacalhau with new potatoes.

It is said that the Portuguese have over 365 recipes for bacalhau although some argue there are 1,001. Either way you are sure to find a bacalhau dish that will. Become your favorite! 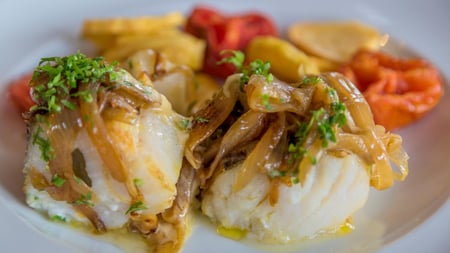