Tucked between the popular tourist destinations of Florence and Venice is the town of Bologna. This classic Italian city sits smack-dab in the middle of the Emilia-Romagna region, known for its university, the oldest in Western Civilization, fascinating architecture, including historic towers and porticos, but, perhaps, most renowned for some of the finest foods in Italy. Bologna is a virtual paradise for anyone who enjoys the history of a blissful nosh.

A foodie foray through Bologna is a feast for all the senses. Behold the beauty in a slice of Mortadella!

Breathe in the heady and mouth-watering aroma of authentic Ragu and experience the satisfying chill of the world’s best gelato as it dances on your tongue.

The real dilemma for those who visit this bastion of belly-busting is just how to sample all these delectable delights without filling up-and out-too quickly! You need to plan accordingly, and then give in with restrained abandon. Here are some of the mouth-watering foods for which Bologna is known. Some are sure to surprise you.

These cheese stuffed bites of deliciousness are one of Bologna’s favorite pastas. The tortellini and larger tortellini, are little pasta “pies” (as the translation affirms) traditionally filled, in Bologna anyway, with ricotta cheese and, often, leafy vegetables such as spinach or parsley.

Tortelloni and tortellini can be served any way you like-with sauce, a simple butter and parmigiana, or in a hearty soup. But why not enjoy as they do in Bologna, tortellini in brodo, or broth? In Italy, simplicity is what makes the food so spectacular and tortellini (and tortellini) taste best when enjoyed the traditional Bolognese way.

Garlicky and pork rich mortadella, Bologna’s famous luncheon meat, is a very distant cousin to what American’s refer to as Baloney (sometimes misleadingly spelled Bologna). Mortadella is a delectable meat flecked with spicy black pepper, pistachios and myrtle berries which add to its unique flavor. This treat is delicious served sliced between bread or as a lovely addition to your charcuterie board.

Don’t pass up without sampling the locally produced famous Italian cheese and equally renown air-cured ham. Anyone who has an interest in authentic Italian flavor knows both the Parmigiano Reggiano cheese and the Prosciutto produced in this region are key. Italy’s Designated Origin of Protection (DOP) distinguishes these regional foods, considered part of Bologna’s gastronomic gifts, as particular to Bologna.

The Italian government holds the Foods of Bologna to a very high standard. Both Parmigiano Reggiano and the salty, delicately-flavored unsmoked ham Prosciutto are artisanal Italian offerings.

One of the most precious gemstones in the epicurean crown of Bologna is the treasure of traditional Balsamic di Modena. Richly flavored and more than a simple condiment, Balsamic vinegar in Bologna a is protected by the DOP and must be certified as sourced from specific territories in nearby Modena.

Balsamic di Modena must go through a delicate and deliberate process of fermentation, which takes 12 to 25 years to produce a rich, highest quality, final product.

Although many have come to believe the sauce called  Bolognese is simply a very meaty topping for spaghetti, there’s much more to an authentic Ragu alla Bolognese.

True Bolognese is intentionally rich and served with wider pastas such as tagliatelle or pappardelle. The sauce is hearty, often includes milk for creaminess and is simmered for long periods to allow the flavors to marry. Paired with a robust regional wine there is no meal as satisfying as this classic comfort food of Bologna

Not Your Mother’s Lasagna

If your idea of lasagna is ricotta, mozzarella and a meat sauce layered between wide noodles then you’re in for a real treat!

In Bolognese lasagne the toothsome pasta gets equal billing as it is layered with creamy béchamel and rich Bolognese Ragu. The end result is glorious-and one of the oldest pasta recipes recorded, dating back to the early 1300’s.

There you have a sampling of the most famous and delectable dishes and foodstuffs of Bologna. Not only are you feasting on many of the most traditional and iconic Italian foods, but you’re doing so in the most authentic way-where these gastronomic legends are most celebrated. 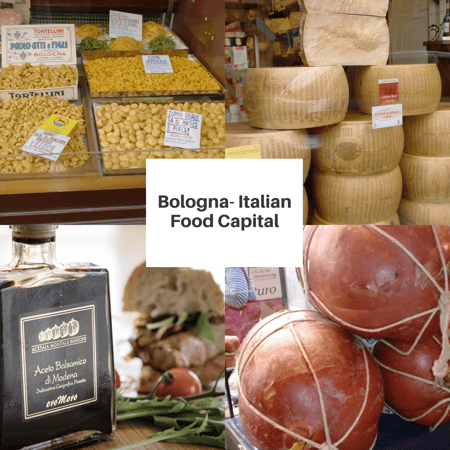 Montmartre - A village Within Paris?!