Montmartre - A village Within Paris?!

Montmartre is one of the most unique and interesting neighborhoods in the metropolis that is Paris. This celebrated French writers’ and artists' enclave is decidedly more village than Parisienne neighborhood. With its quaint cobbled streets, roads that lead to nowhere, and country-like atmosphere it’s an area steeped in charm and history, and rife with centuries of secrets.

This village within a city is located on the Right Bank, in the northern section of Paris. Perhaps most widely recognized for its depiction in the Renoir masterpiece, “A Garden in Montmartre” the area is also known for the breathtaking Basilica Sacre-Coeur. The Basilica sits on the crest of a hill and is a popular tourist attraction. Panoramic views on a clear day are seemingly endless.

But beyond the typical tourist attractions this village-like neighborhood offers much more to see and do.

In the heart of this lovely area is the Rue Norvins. Buildings along this road date back to the 18th century, prior to the French Revolution. The architecture and gardens contribute to Montmartre countryside-like charm.

One of the buildings along the Rue Norvins is La Folie Sandrins. The mansion, once home to a wine merchant, was transformed into a mental health facility in 1806. Although the building is on private property, it is worth a stroll past if only to stop and admire the impressive centuries-old architecture.

Long before cafe culture, museums, haute couture and bold living took over the city of Paris, Montmartre was home to sprawling farmland and hectares of green space. Although most of the agricultural history of the area has been overtaken by urban sprawl there does remain a small trace of Montmartre's rural past.

Of the many windmills that once graced the hillsides around Paris only two remain. They are located in Montmartre and visible as you stroll the rue Lepic. This is also a wonderful opportunity to examine the unique and lovely wares offered in the independent shops lining this winding road.

The windmills of Paris are estimated to have numbered up to 300 at one time. Used to mill grain and press grapes from long forgotten farms and vineyards, these windmills were an integral part of life in the Parisienne countryside. The windmills of Paris have been immortalized by many legends of the art world, notably Van Gogh, Renoir, Utrillo and Talouse Lautrec.

The Musée de Montmartre is well worth a visit if only for the hidden green oasis that’s tucked behind the museum. The gardens are named after the former master of the house and offer a lovely respite from the hustling, bustling life around the 18E arrondissement.

The Best Secret in Montmartre

As agricultural life made way for a more urban style of living, the vineyards that once surrounded Paris slowly disappeared. By 1900 there were no more vineyards within the city. In 1933 the City of Paris sought to stop real estate developers from taking over all of the available green-space by purchasing land to create the only Parisian vineyard.

The property looks as though it has always been there, in the midst of  established homes and gardens. However, Clos Montmartre has only been producing grapes for less than a century-a relative newcomer by French standards.

The vineyard produces about 1000 bottles of Clos Montmartre annually, which are auctioned during the much-anticipated yearly Harvest Festival. Profits go back into the community to fund various local projects.

These are only a few of the secrets and sites you’ll discover in this “village-within-Paris.” Wonderful cafés, charming squares, and the alleged “oldest street in Paris” are all waiting for you in the 18E arrondissement, known as Montmartre. 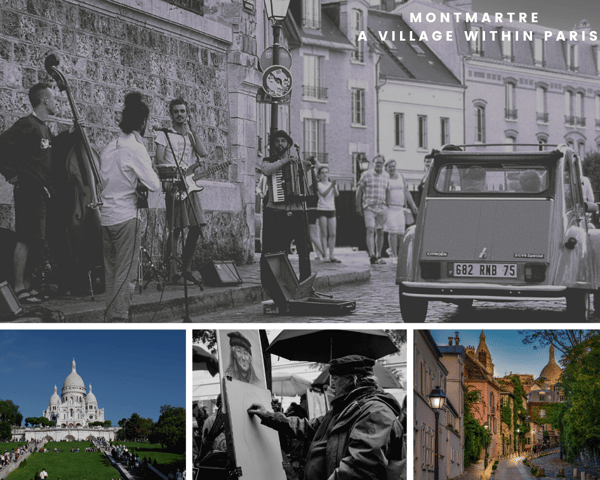 7 Must Have Experiences in Italy